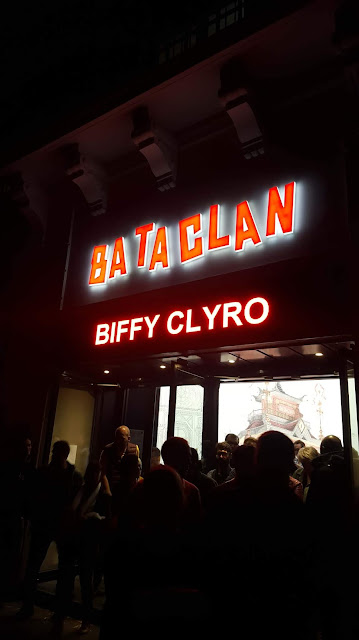 They say the sign of a good song is that it can be performed, and sound equally as good, acoustically. Whilst I'm not 100% on board with this statement, I do appreciate a good stripped down rendition, so when Biffy Clyro announced a tour in support of their new unplugged album, I wanted to pop along.

A quick train ride over to Paris brought me to the iconic venue known as Le Bataclan. It was an interesting experience entering this venue, after the horrific events a few years back, I have to confess to a small amount of unease on the initial walk down to the theatre, however this immediately dissipated after walking into the room and feeling the embrace of a warm and welcoming atmosphere.

The gig itself had more a singalong celebration vibe to it rather than the rowdy rock n roll one Biffy usually bring with them. Surrounded by onstage foliage and the 18th century decor of le Bataclan, the trio jump straight into the heavy hitters with The Captain and Biblical. The lack of fuzz and ear splitting guitars is something that takes a little while to get used to, especially as the opening bars of Saturday Superhouse start up.

This intimate scenario does allow the band to dust off some more obscure tracks from their back catalogue, tracks such as Drop it and The Rain which fit the mood perfectly. Talking about fitting the mood perfectly, Ellipsis track Small Wishes is a personal highlight, with its oddly folksy arrangement and audience participation wolf howl moment hitting that perfect mix of ecstasy and hilarity.

We're also treated to some new tracks from the band, with the setlist featuring both A Different Kind of Love and Adored, the latter appearing on their forthcoming cinematic experiment Balance, Not Symmetry. However, its an older track which steals the show. Justboy, which appeared on their very first album, soars superbly this evening, triggering one of the loudest singalongs (in a night of singalongs) and descended a state of euphoria over yours truly.

All in all, its a night of celebration, the audience would have let the trio go on all night, and the scary thing is Biffy probably could have, such is their extensive catalogue of tracks. So Biffy can entertain both electrically and acoustically, I guess that makes them a pretty good band after all. Who knew!