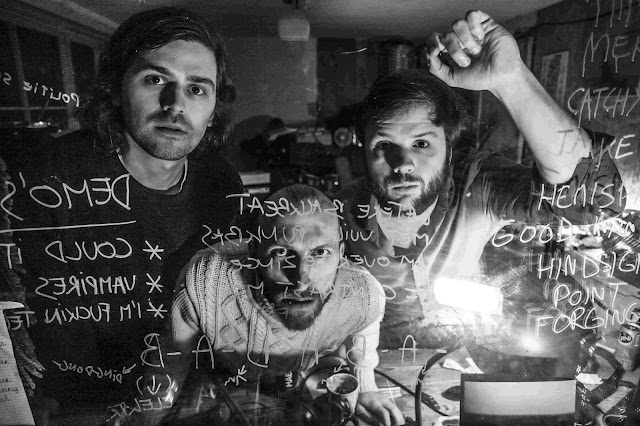 Who's in the mood for some Belgian punk music? The answer to that question should always be a resounding YES. Thats why, this week I bring you the musical stylings of Teen Creeps.

The trio from Ghent combine a mixture of melodic 90s alt rock tones with a solid punk base to create a sound which the band describe as "post-everything". At times it has an air of melancholy, as is this case on new single Mercury, which is about falling back into the bad habit of procrastination.

“You have big plans, but you’re not getting anything done. Because you’re just too scared to get things started. So you just leave it and go out. And hate yourself for it.” explains bassist and vocalist Bert Vliegen.


Bert was kind enough to take on the now infamous introducing questionnaire, revealing in the process how Belgians learn English whilst giving my personal favourite ever answer to question 10.


I’m gonna go with Sonic Youth’s “Daydream Nation”. One of the first records I owned, and an absolute masterpiece in my opinion. I can keep going back to it and discover something new about them. They’ve released a ton of great albums in their career, but “Daydream Nation” will always stand out to me as a cohesive, sonically mind-blowing record.

Our sound engineer once gave me a copy of the soundtrack to the “Sgt. Peppers”-movie, which featured the Bee Gees and Peter Frampton covering those classic songs. As much as a love the Beatles, these songs and even the Bee Gees, their attempt to reinterpret these songs is just awful. An expensive, overproduced, disco-y mess.

I grew up in a small town on the outskirts of Belgium, so it’s probably a combination of boredom and wanting to be one of the cool kids who could play guitar.

A good, loud “Fuck” will always do the job.

J Mascis (Dinosaur Jr.) and Randy Randall (No Age) on guitar, Warren Ellis (The Bad Seeds) on violin, Mike Watt (Minutemen) on bass, Grant Hart (Hüsker Dü) on drums and Patti Smith on vocals. I’d pay a lot of money to hear that.

I’m a huge cycling geek. That’s not really a ‘talent’ but more of a weird nerdy hobby, I guess. But still: ask me anything about the sport and I’ll have an opinion and multiple facts to prove my point ready in no time.

Definitely “The Simpsons”. Those shows aren’t dubbed in Belgium, so that’s how you learned English. Still one of the funniest shows ever made.

Hard one, can’t really see myself functioning in a different scene. I guess I’d like to try and be a writer, but in a John Irving-kind of way. Thoroughly researching everything, carefully building a story, churning out a book every two years. Yeah, that sounds like something I’d like to try.

“It’s okay man, I wouldn’t believe in myself if I were you either! Come in, everybody’s expecting you!”