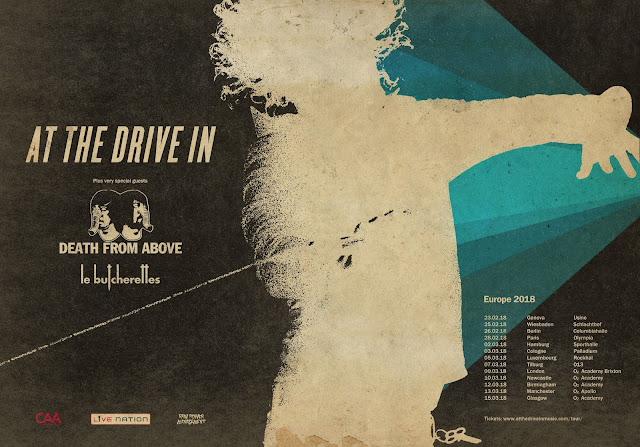 This. Gig. Was. Stacked.

Thats the only way to describe a line up which consists of At The Drive In, Death From Above and Le Butcherettes. Stacked.

Usually in these reviews I concentrate on just one act, maybe giving props to another band on the bill who really put on a great performance, however this time it feels only right to give all three bands an equal footing in this article.

If I was content savvy, I would probably split this article into three and have content for days...but thats not the way we do things around here, we try and jam as much intto every article as possible. So without further delay, lets talk about the bands!


Imagine Kate Bush on acid. That's the kind of vibe you get from Le Butcherettes, a band who combine whimsical melodies with off kilter keyboards and frantic percussion.

Their performance was the most visually arresting of that night, with the amazingly named lead singer Teri Gender Bender throwing all kinds of shapes on stage whilst managing to keep things tight musically at the same time. The Leibniz Language was a stand out track, with its creepy/catchy keyboard leading the audience into a hypnotic waltz, whilst Dress Off proves you don't need anything but drums and vocals to put together a cracking punk tune.

1. Witchless C Spot
2. Burn The Scab
3. Boulders Love Over Layers of Rock
4. I'm Getting Sick of You
5. Dress Off
6. The Leibniz Language
7. Spider Waves

I've had the pleasure of seeing Death From Above twice now and each time my hearing has left significantly more impaired. It's a fair price to pay however, as the death disco duo delivered a shock and awe setlist opening with the bombastic Nomad and working there way through a setlist which included cuts from all three studio albums.

Debut album smash Romantic Rights is the highlight of the evening with that iconic intro strring up something of a fuss in the crowd. This was closely followed by the colossal Holy Books from their 2017 effort Outrage! Is Now, which is punch you in the face brutal and an invitation to furious head banging.

All in all it was a lot of fuzz, a lot of riffs and a reminder that when it comes to the drum and bass combination there really is no one better. I'm looking at you Royal Blood.


At The Drive In


It's been 17 years since At The Drive In's seminal album Relationship of Command was released to mass adoration from the rock community, and its a record which continues to inspire the new era of acts coming through today.

It's no surprise then that the majority of this set is made up of cuts from that very album. Arcarsenal opens proceedings and sends the crowd into hysterics, almost two decades later and these songs still sound just as fresh. Whilst Relationship of Command cuts are no doubt the highlights of the sets we are treated to Napoleon Solo from In/Casino/Out and Vaya EP snippet 198d.

New album Interalia made up the rest of the set, and the tracks hold their own against the classics. No Wolf Like The Present and Hostage Stamps are the pick of the bunch...but they pale in comparison to tracks such as Sleepwalk Capsules and Invalid Litter Dept.

We also finally get an answer to what the on earth One Armed Scissor is actually about as revealed by Cedric Bixler Zavala...

"There used to be a great artist called David Bowie, and he had a son who became a film maker called Duncan Jones. He made a sci-fi movie called Moon, has anyone seen it? It's about space madness, and thats what this track is about."

The set ends with the alt/pop stylings of Pattern Against User and sends the audience off in a haze of post gig glee. When a band has an album as good as Relationship of Command in the bank, its hard to not put on a great show, but it also piles an enormous amount of pressure on the band to deliver.

Luckily for us, At The Drive In always deliver.