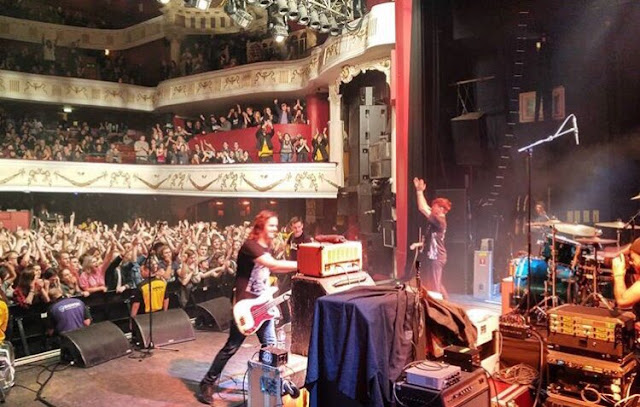 Support bands get a bad rub of the green at times. For many concert goers, the main event is the only reason to turn up and so the other acts on the bill can be pushed aside, or worst yet ignored.

This is a short sighted strategy for music lovers, because everyones favourite band at some time or another was in that support slot paying their dues. That's just the way things are. So, why miss out on the chance of catching the next big thing, just because they haven't caught your attention yet?

Sometimes however, a bill is stacked with quality from start to finish. Last weekend, I was lucky enough to witness such a show in London. Headlining were punk staples The Menzingers and first on were Philadelphia trio Cayetana, but it was the second act on the bill that stole the show.

PUP were a tour de force at the Shepherds Bush Empire. Having released one of the albums of the year back in 2016 in the form of the brilliant The Dream is Over, this was the first time the band had graced UK shores in over a year, and with the album well and truly having found its audience within that time, the crowd were eager to see some of the hits in action.

From opener Doubts, the energy levels emitted from the Canadian four-piece were through the roof, crashing around on stage they immediately had the audience in the palm of their hands, inciting riotous scenes from both the moshpit and the balconies.

The bands older tracks get a lot of love tonight as well, Guilt Trip delights with its jagged underground lead riff, whilst Dark Days is the nights pop moment, although you wouldn't have thought it from the crowd reaction, who go absolutely ape shit during its run time.

Whilst their self-titled album tracks go down a trip, the second album delivers the nights most memorable moments. My Life is Over And I Couldn't Be Happier gets its harmonies delivered back at the band twice as loud, whilst Sleep in the Heat emits a chorus of woah-ohs from the crowd which carry on long after the track has ended.

The show ends with a string of four tracks which encapsulate the bands sound nicely. Familiar Patterns is an alt-rock anthem with a strong chorus and colossal ending and Old Wounds is a snarling punk monster, with lead singer Stefan going full rock star and stage diving into the throng of beings lapping up every note of this tune.

If This Tour Doesn't Kill You, Then I Will and DVP close out proceedings, the first inspiring a singalong detailing the not so happy feelings that life on the road can unfortunately inspire, the second giving everyone in attendance one last chance to dance before the curtain falls. An opportunity that is not wasted by anyone.

PUP aren't unknowns, and should have arguably been headlining this gig, so they aren't your atypical support band. However, this is still a lesson for anyone thinking of skipping out on bands lower down on a bill, because you could end up missing a classic.

*I did not take the above photograph. I got it off the bands Twitter page. If you'd like me to give credit, or take it down please let me know.