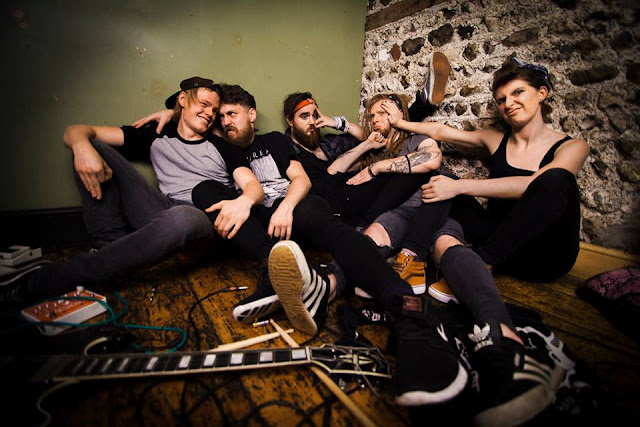 When you describe yourselves as a "five gut mathcore jump scare scream team" you set yourself up to make quite an impression. Five piece The Guts know this, but are fully aware that they have the ability to attack the senses with an, at times, dis-orientating brand of aggressive tech-hardcore.

Having released their debut EP Birth back in 2016, the band have since been honing their craft up and down the country, growing a reputation as a fierce live act and impressing audiences and the likes of Small Pond recordings, who have featured artists such as And So I Watch You From Afar and the Dillinger Escape Plan.

In anticipation of their sophmore EP, the band were kind enough to answer the now infamous introducing questionnaire. They reveal a love of post hardcore, supersymmetry and the large hadron collider as well as...er, freeview adult entertainment!

You can read the answers in full below.


Ben-Gut: Fake History by LetLive brought that epic af old school post-hardcore vibe (early Underoath / Glassjaw / early Fightstar etc) right outta 2005 and into the current scene, but like it was still super fresh, even original feeling, and without getting rid of any heaviness or huge breakdown-isms.

Dan-Gut: Metallica's St. Anger. I hate this album so much I wrote an entire hate piece about it for a magazine I briefly wrote for. Trash snare. Garbage lyrics. Don't get me started...

Connor-Gut: It's somewhat the greatest of vices; the sheer output of animosity and pure adrenaline amalgamates into something truly unique.

That and the sexy boys and girls you pull on the regs.

Weez-Gut: It's a toss-off between the old classics - fuck and cunt. Fuck can be used for as a noun, a verb, an adjective... Its diversity is a credit to the English language. And cunt because vaginas lol

Connor-Gut: I've always thought if Metallica and Fetty Wap were to write an album, it would be the greatest thing to ever exist. An absolute pinnacle of musical genius.

Dan-Gut: In all seriousness I was at CERN for a brief period researching Supersymmetry at the Large Hadron Colider.

Joe-Gut: Favourite childhood tv show was babestation, I just found the many shades of orange the ladies came in very stimulating and always enjoyed imagining what kind of philosophies they were discussing with the person on the other end of the phone.

Joe-Gut: When I arrive at the pearly gates I want to hear God tell me that I'm a good lad and for him to ruffle my hair. Also that all the silicon stuffed babes from babestation are waiting to talk to me on the phone, thus answering the question that has dogged me my whole life.
The Guts are set to release their second EP entitled Flesh on the 1st October.