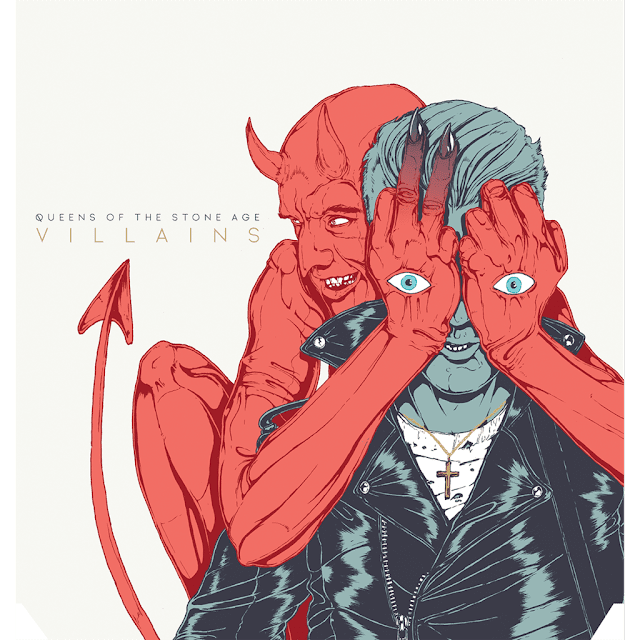 Making music is a cyclical process. Make a song, record it, sell it, play it live and repeat. That's usually how it goes anyway, and the time scales of that process can differ immensely. Some bands are happy to spend years away from the limelight, locked away in their musical caves, intensely preparing for the start of the musical rollercoaster (or carousel) all over again.

2017 has seen a number of great acts return to the spotlight with amazing new tunes. I've been pretty lax on shouting about these tracks on here, and that really bugged me. So to remedy that, I've decided to do a round up of some of the best comebacks I've witnessed this year.

Queens Of The Stone Age - The Evil Has Landed

I cannot wait for this album. PR's send me a link.

This band, man. They really are something special, you know? After indulging in fan service with their recent anniversary tour in support of first album Take to the Skies, Enter Shikari are ready to crack on re-defining what it is to be in this band and introduce themselves to a new audience, perhaps unfamiliar with their heavier hi-jinx.

Live Outside is a straight up electro rock banger with a chorus that will burrow into your brain for days. Front man Rou Reynolds commented that for their new album The Spark, the band decided to not worry about how HEAVY a track was going to be and instead focus on the songwriting process, and really think about what approach would benefit the song as a whole.

It's an interesting change of pace, and you can guarantee the Enter Shikari of three years ago would have shoved a breakdown slap bang in the middle of Live Outside. But you know what? It doesn't need it, it's fucking great how it is.

Death From Above 1979 - Never Swim Alone

Death From Above 1979 are criminally under rated in the UK. Hopefully that will all change after new album Outrage! Is Now drops. We've so far heard two tracks from that forthcoming record, and they're both show stoppers.

Latest track Never Swim Alone is as simple as it is effective. It's just over two minutes long and...well quite frankly it leaves you begging for more. Hit repeat enough time and you may find it transforms into a rock n roll mantra. And with a meditation technique that strong, enlightenment is almost guaranteed.

From a two piece to a band with a seemingly endless number of members to choose from. Creature Comfort is a dark synth led track with lyrics about struggled teenagers and the quandaries of modern life.

Sounds good, right? Well trust me, it's a blast. With vocalists sparring throughout, the epic synthesizers and hypnotising drums it's a style that suits this band down to the ground. And guess what,  it sounds even better live.

Say what you want about the new album as a whole (I've read criticism but haven't stuck the whole thing on yet) this track is a diamond and should be added to your playlist immediately.

Plucky Brit rockers Don Broco appear to be consistently delivering rock bangers as if it were the easiest thing in the world currently. After previous track Pretty, caught everyones attention with it's devastating riff and terrifying video, the band have just released Technology, and it shreds.

With a third album on the way, and enough hit songs in the bank to make any rock act envious, Don Broco could be on the cusp of achieving mainstream adoration, the likes of which they absolutely deserve.

Keep at it lads, just don't drop Thug Workout from the set.