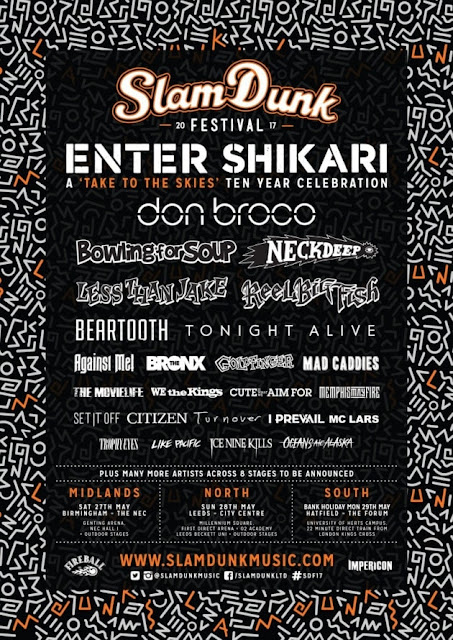 It's probably the closest thing the UK has to the Warped Tour (if you discount the UK version of the Warped Tour) and features a lot of new and exciting acts propped up with a fair share of rock n roll heavyweights.

This years tour had a special twist to it, it would be the setting for Enter Shikari's ten year celebration of their debut album Take to the Skies. These would be the only UK shows they'd play (excluding one warm up show in Belfast) in support of this tour and was a chance for fans to get seriously nostalgic about one of the defining albums for many an angsty teen.

Needless to say... I had to attend.

Of course, this wasn't the only draw, and upon arrival I had the pleasure of catching one of the highlights of the festival in the form of Sorority Noise.

Their brand of emotive rock n roll was a pleasure to behold, tracks A Portrait Of and Using were stand outs and I wouldn't be surprised to see them climb festival bills rapidly over the next few years. They deserve it. Check this band out if you can!

Next up were UK three piece Black Foxxes, whose debut album in 2016 was a massive statement of intent from a band who have more than enough tools in their arsenal to make a success of this rock n roll thing.

They appeared on the Key Club stage, and unfortunately the sound in this particular venue left much to be desired. Despite this, the band managed to make it count, with their huge choruses cutting through the fuzz and tracks River and I'm Not Well proving just how great they are in a difficult environment.

The band commented on the unfortunate clashes they were up against, with We Are The Ocean and Milk Teeth appearing on different stages at the same time. "You made the right choice" they said. I'm inclined to agree.

Mad Caddies were next on the agenda.

The Santa Barbara Ska Punks demonstrated exactly what you would expect from a brass happy punk act. They instigated a lot of skanking, thrashed out break neck drumming rhythms and created one massive party atmosphere.

And with that it was time for an interval.

After some beers and the FA Cup final, it was back to the bands and first up was one of the most exciting rock acts on the UK circuit today. Don Broco.

I'll admit, that before this gig I was a novice when it came to the sounds of Don Broco. Oh what a fool I've been. This band commanded the main stage of the festival as if it was nothing. As soon as the first song kicked into gear, the entire crowd went along with everything this band asked.

With a hook laden set and an array of dance-able  numbers (Automatic) as well as tracks which created some of the biggest mosh pits of the festival (Thug Workout) these lads were truly the surprise package of the festival. You've made a new fan boys.

And so, it was time for the main event of the festival, with St Albans finest, Enter Shikari, ready to take to the stage.

As if you didn't already know, this bands live sets are special. Energy, aggression and euphoria all collide, and at Slam Dunk they added a hefty dose of nostalgia to that concoction. The songs on display tonight were (for the most part) written more than 10 years and this band have grown a lot since then, so it's a pleasant surprise that these songs are given the performance they deserve tonight.

It's not an over reaction to say the tracks sound better than they ever have done before. From the ever presents in sets today such as Mothership and Sorry You're Not a Winner, to the forgotten relics, No Ssssweat and Anything Can Happen in the Next Half Hour, even to the never before played Today Won't Go Down in History every song sounds fresh and every song is delivered to its full potential.

With a hefty dose of activism sprinkled throughout the set and a tribute to Manchester in the form of an acoustic rendition of Half the World Away before stand out track Adieu, the crowd are in buoyant spirits for the finale of Ok Time For Plan B followed by the crushing Appeal and the Mindsweep II.

A fittingly hardcore end to a hardcore festival experience. If you're looking for good music, good vibes and a good time, I'd seriously consider Slam Dunk for all your festival needs. Plus, if you're up to it you can head into Brum for a few drinks afterwards!

Because after all, isn't that what festival season is really all about? (No.)