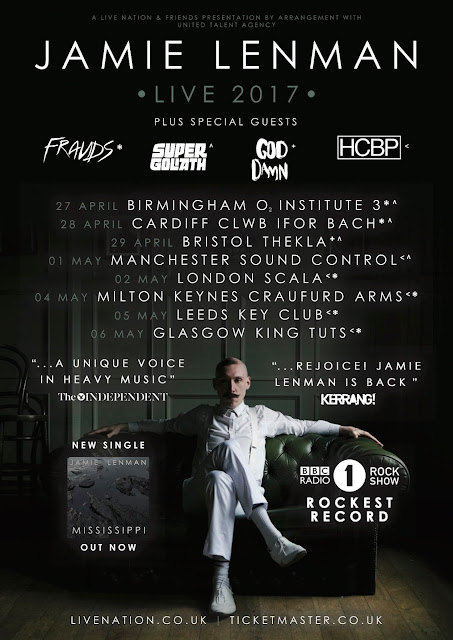 Jamie Lenman is one of rock's great characters. If his impressive back catalogue of tunes hadn't already made that abundantly clear, then his stage attire sealed the deal. The former Reuben frontman strode out in front of The Craufurd Arms faithful, sporting a World Cup 2002 Ronaldo haircut, whilst dressed head to toe in dazzling white. What a guy.

Of course when you create music as arresting as Lenman's, a t-shirt and jeans combo just isn't going to cut it. The attire is truly justified as soon as the music starts, with new single Waterloo Teeth kicking off the gig under a hail of percussive crashing and banging, an apt introduction with the track soon bursting into it's full alt-rock glory.

A new album is on the way, and as is commonplace with such things, touring cycles usually adjust. This time round Lenman has decided to strip things down personnel wise, and is accompanied only by a drummer. As a two-piece the sound loses none of it's fullness, which is always a worry when you take band members away from the equation. if anything, it has given Lenman a chance to truly command the full impact of these songs for the first time, and he seems to revel in the responsibility that it's all or nothing.

The setlist draws from all areas of his musical repetoire. Fizzy Blood re-visits the crushing thrash of his Muscle Memory double CD, Parties Break Hearts harks back to the Racecar...days of Reuben and there's even time for the acoustic guitar to get a run out for his folk inspired tracks such as Shotgun House and If You Have To Ask You'll Never Know.


The ability to entertain has always been one of Jamie Lenman's strong suits, and his between song banter is some of the best I've heard. He's a very funny man, and manages to referee the transitions between trudge death metal tracks and bluegrass ho downs effortlessly. He's more than aware that this isn't your straight forward live experience, and manages to coach the crowds mind set into embracing the shift in atmosphere as if it was nothing.

It helps of course, that the songs he leads into mainly consist of bangers. Highlights include new songs Mississippi and All of England is a City, the break neck Six Fingered Hand and the Reuben classics Some Mothers Do Ave' Em and finale Cities On Fire.

It's a great night of music, shout outs to the two support bands HCBP and Frauds who were also excellent, and I suggest you check them out immediately.

Jamie Lenman has promised to release more new music as 2017 progresses, and if this Craufurd crowd was anything to go by, it will be more than well received. One of rocks great characters is back, and he sounds better than ever.