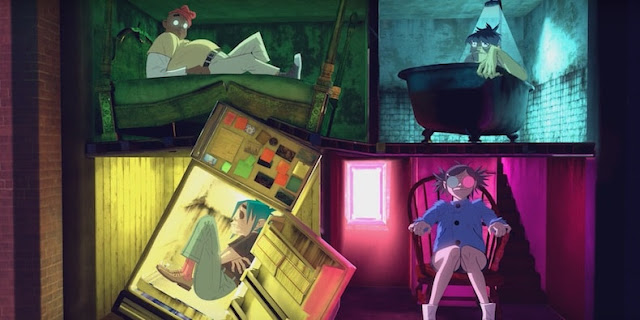 Damon Albarn and Jamie Hewlett's virtual band Gorillaz returned this week with four new tracks from their forthcoming album Humanz. They're entitled Andromeda, We Got The Power, Ascension and my personal favourite of the lot Saturnz Barz.

This is part of what makes Gorillaz so great, the ability to welcome in a entire roster of musical guests from the entire spectrum of the sonic landscape. Which reminds me...you should really watch this video on deconstructing genre by Youtuber KaptainKristian. It's good stuff.


Anyway back to the best song of the recent release! Saturnz Barz features Popcaan, a dancehall general over in Jamaica who lays down the vocals in this track, which goes together just brilliantly against the backdrop of heavy sub-bass which will have your ribcage rattling.

Add to that concoction Albarn's vocals in the chorus and the creepy synthesizers and you have yourselves one hell of a return.

As if all that wasn't enough, it's also accompanied by stunning visuals, which is now the standard for Gorillaz. After all, a virtual band needs to be pretty good...virtually. The music video sees the band wander around a haunted house before being transported into deep space. Standard procedure.

All in all, Saturnz Barz is up there as one of the best things Gorillaz have done and should be added to your playlist immediately. New album Humanz is released on the 28th of April.

You can watch the video for Saturnz Barz below.