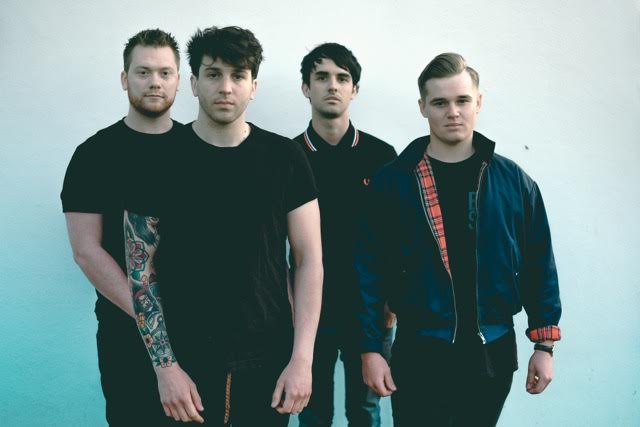 It's been a while since we featured some straight up pop rock on this here blog. Too long in fact, too god damn long. So it's a pleasure to introduce you to UK four piece Faux.

Hailing from Southampton, the band released a four track EP last year and are about to join Counterfeit on their UK tour this April. They've also just released a brand new video for stand out track Hot Headed, which features a couple of vocal melodies that you won't be able to shake off easily.

Singer Lee Male was kind enough to answer the now infamous introducing questionnaire below. He proclaims his love (and hatred) for Brand New as well as progressively becoming less coherent as the questions go on. Rock n roll ain't an easy gig though, so we'll let him off.

Deja Entendu by Brand New, purely because it was the first album that I really felt was a single piece, not just a collection of songs.

Deja Entendu by Brand New, I've listened to it too much.

I think just the idea of being creative with friends sounded really appealing, I went straight from being a bedroom guitarist to being in a punk band that only played originals so I didn't do the whole Green Day/Blink 182 covers band that most kids got to have fun with but maybe it's not too late?

I'm going to have to go with shit.


7. Obvious musical skills aside, do any of you have any secret talents?

James is really good at looking like Ron Weasley oh and Luke can strawpedo a bottle of red wine.

Kenan and Kel for sure! Iiiiiiiii put the screeeeeeeew in the tuna!

I would like to be the Tri-Wizard champion, I know that it would be a very risky career path as the competition is strong and you only get one real shot but I feel the eternal glory our weighs that.

Everything you can see is made of garlic bread.

You can catch Faux live on the following dates: