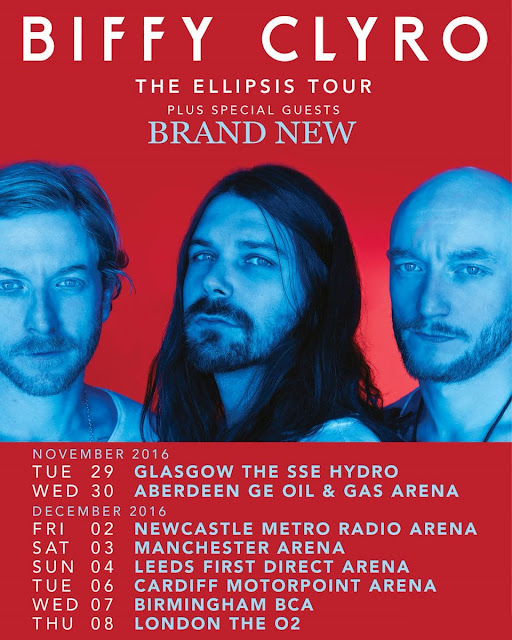 Ever get the feeling you should just sign up for a season pass with certain bands? I had a slight twang of deja vu at the Metro Radio Arena last Friday when Biffy Clyro's intro music hit. Seeing a band for the third time in the space of a year will do that to you. Little did I know the trio had a surpise in store for those in attendance.

Tonight is not just a night to perform your standard set consisting of 15 tracks, oh no. Tonight they step things up a gear and perform a mammoth 27 songs for those in attendance.

Yes, it turns out Simon Neil and the boys had decided for this arena tour, it was time to unleash their back catalogue in all it's glory. They haven't got much of a choice in truth, their last four albums have all been hits, leaving them with a plethora of material to choose from...and it would be a shame to leave some of those crowd pleasers out.

And so they arrive, on an LED entrenched stage, surrounded by thousands of adoring fans, and they look like they're in their element. Biffy Clyro 2016 are a force to be reckoned with.

Whilst new album Ellipsis wasn't necessarily a heavy album, the new songs sound particularly vicious this evening. Opener Wolves of Winter, Herex, Animal Style and On a Bang in particular prove that whilst they maybe seven albums deep, the scots still have some riffs left in the tank.

Elsewhere in the set, there's plenty of cuts from previous albums. The decision to bring back Infinity Land's Wave Upon Wave Upon Wave as well as Blackened Sky's monster anthem Justboy, ensures the long term fans have their moment and opens the door for new fans to discover what their new favourite band used to get up to back in the day.

But of course, the adoration lies mostly with the tracks taken from Puzzle and Only Revolutions. Many of Horror envokes a deafening singalong, That Golden Rule sparks riotous mosh pits and Mountains triggers...well, yet more adoration from their besotted public!

So what's next for Scotlands premiere rock trio? With this performance they've proven they can comfortably slay arenas, and provide a setlist boasting a treasure trove of hits. The band have said they like to keep it fresh, and whilst Ellipsis showcased their ability to do that in a musical sense, will the band be willing to throw out the rule book in a performance sense?

They've already headlined Reading and Leeds festivals this year and performed their biggest ever show at Glasgow's Bellahouston park. Do they dare go bigger, or is it time to retreat and go back to the intimate stages of old?

Whereever they decide to go from here, you can bet there'll be plenty of surprises in store and who knows... maybe release a season ticket for those of us who keep on coming back for more.