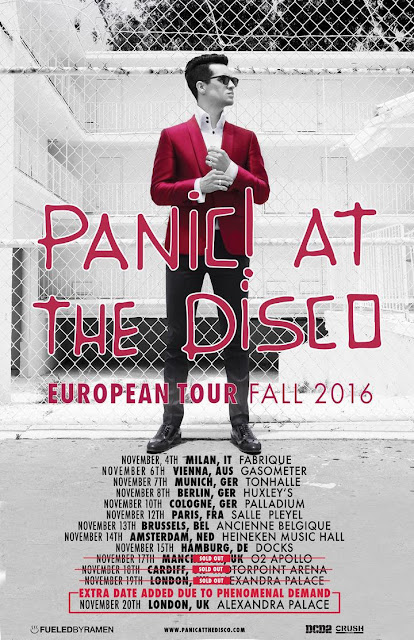 Panic! at the Disco. They've been around for over a decade now and are eponymous with feelings of teenage angst for anyone over the age of 21.

A Fever You Can't Sweat Out was the piece de resistance during the mid noughties "emo" movement, causing the sweepy fringe and top hat combo to dominate the fashion in secondary schools everywhere. Whether that's a good thing or not, is certainly up for debate. What I'm trying to say is that they made an impact.

And they didn't stop there! P!ATD have released five albums, their latest Death of a Bachelor has spawned several successful hit singles and lead to their biggest UK shows ever, including two dates at London's famous Alexandra Palace, the second of which I was lucky enough to attend.

Beginning with the Rock Lobster sampling Don't Threaten Me With a Good Time, it's immediately clear that this isn't a nostalgic trip down memory lane for the band, this is a celebration of their recent output with a sprinkle of the classics for good measure.

The new songs are performed with a full brass band back up, giving them added impact which really does make them them the stand out tracks of the night. Crazy=Genius is even given an extended drum solo battle, within which singer Brendan Urie hops on to a second kit and shows off his percussive abilities.

The classics are received just as you'd expect. The Ballad of Mona Lisa, Nine in The Afternoon and new single Hallelujah all trigger mass sing-alongs from, what I have to say, is one of the most diverse crowds I've ever been part of. Time to Dance is a nice throwback to 2005, and is appreciated by the, now not so angsty, 20 year olds in attendance.

I really must give special mention to their cover of Bohemian Rhapsody, which is flawless. To have the balls to cover it in the first place is something, but to go ahead and smash it in the style they do is next level. Well played lads.

And then of course there's the big one, I Write Sins Not Tragedies. Not earmarked as the set closer, perhaps a sign from the band that one day they'd like to not play it, it is the most celebrated song of the night. That violin riff...so good.

All in all, the emo scenseters turned pop rock heroes turned out a joyful performance, one that was much needed after all the hoopla going on at the moment. Now, where did I put that top hat

- Don't Threaten Me with a Good Time
- Vegas Lights
- The Ballad of Mona Lisa
- Hallelujah
- Time to Dance
- Emperor's New Clothes
- Girls/Girls/Boys
- Ready to Go (Get Me Out of My Mind)
- Nine in the Afternoon
- Crazy=Genius
- Miss Jackson
- Golden Days
- Bohemian Rhapsody
- Death of a Bachelor
- LA Devotee
Encore:
- I Write Sins Not Tragedies
- This Is Gospel
- Victorious