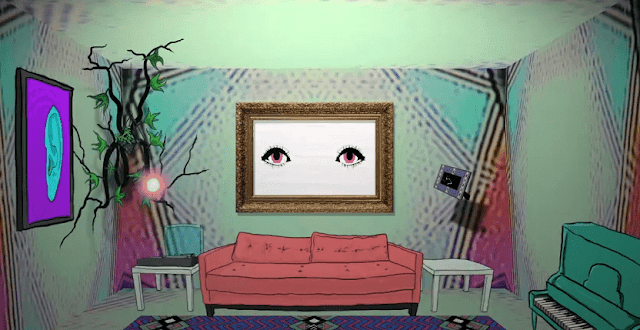 Introducing Bayonne, AKA Roger Sellers, an electro pop artist from Austin Texas who is currently invading the homes of millions through his last single Appeals, which has been included on football sim FIFA 17's soundtrack. That's exposure you can only dream of!

He's quite the artist, creating music that exists within it's own dreamscape. It conjures images of alien landscapes and environments which will have you entranced from start to finish.

With a handful of European shows beginning this October, he's marking the occasion by releasing a video for his latest single Living Room.

In the words of the man himself... "Living Room sounds different than anything else I've released…it’s much more sporadic and wild. I wanted the video to be different as well and I love the way the animation makes it feel so playful, bizarre, and cartoonish."


Bayonne was kind enough to answer the know infamous 'Introducing Questionnaire". From exclaiming his love for indie rock duo Wye Oak to revealing himself as a bit of a pool shark, it's quite the insight into the artists world!

One of my favourite albums as of recent would be Shriek by Wye Oak. It is one of the few albums that I can always go back to and never get bored of. From beginning to end, the album is so tastefully arranged and produced, plus Jenn Wasner has the voice of an angel.

2. If you had to describe your sound in three words, what would they be?

3. What made you start making music?


I grew up in a household that really loved music, so I was very exposed to it at a young age. Throughout my childhood and teens I was trying to imitate a number of different artists and musicians, which led to skills in instruments like the piano, guitar, and drums. I started writing and recording my own songs around the age of 14 and began exploring my own ideas and sounds.

Shit. I tend to use the word often in my live performance.

5. If you could create a band from musicians, living or dead who would you choose?

Jonny Greenwood of Radiohead, Jenn Wasner of Wye Oak, Rob Crow of Pinback and Steven Drozd of The Flaming Lips.

6. Obvious musical skills aside, do any of you have any secret talents?

I’ve been told that I’m pretty good at playing pool. When I’m traveling, one thing I love to do is check out different pool halls in different cities. I also played a bunch when I was in college so I guess I’m pretty alright.

7. What is your favourite childhood TV show?

8. If you weren't making music, what profession would you like to attempt and why?
Any job that would allow me to travel often and not sit at a desk from nine to five would be a great gig for me. i’ve become so used to traveling, it would be difficult for me to imagine doing anything that required me to stay in one spot.

And finally...if Heaven exists, what would you like to hear God say when you arrive at the pearly gates?