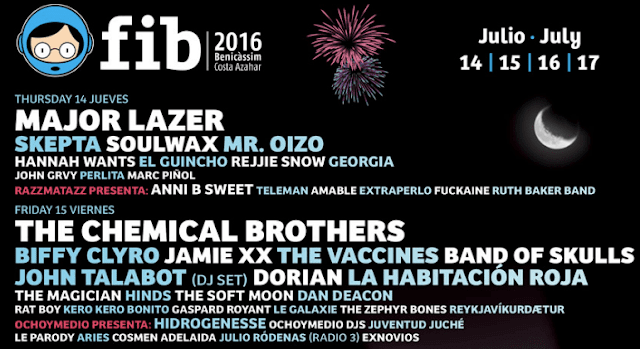 We are slap bang in the middle of festival season, and what better way of celebrating that fact than packing up your shit and heading off to sunnier shores for yet more musical goodness. If that sounds like your cup of tea then get yourself over to Benicassim this weekend.

Based around an hour from Valenica in the small town of (who would have guessed) Benicassim, the festival otherwise known as FIB mixes the best parts of the festival experience and a beach holiday all into one.

This years line up is pretty outstanding, with British heavyweights mixing it up alongside the US and Europe's best.

The headliners are fierce; Muse, Kendrick Lamar and The Chemical Brothers top the bill with one of the best bands touring right now Biffy Clyro also appearing, ready to steal the show with new album Ellipsis in tow.

Of course I'm jumping ahead slightly. Thursday boasts not only the king of Grime Skepta, but one of the biggest DJ acts around Major Lazer, proving this truly is a four day music bonanza. Add Mr Oizo and Soulwax to proceedings, and you've got four acts that could go head to head with any four on the festival circuit right now.

Move on to Friday and you've got house music icon Jamie XX, indie rockers The Vaccines and the up and coming Rat Boy. Of course the main event is Biffy Clyro followed by The Chemical Brothers. Both acts can put on a hell of a show.

Saturday continues the rock onslaught with the biggest band in the world Muse headlining. Their seventh album Drones was a return to the hard rock stylings of earlier efforts, whilst also maintaining the grandiose sound they've perfected across their career. It's going to be an explosive show.

Disclosure and Bloc Party are in charge of warming up the crowd (as if that's necessary in this heat).

Festivities end on the Sunday with the amazing Kendrick Lamar. His performance could very well be the stand out moment of this years event, his socially conscious raps and infectious beats have rocketed him to the top of critics and fan lists alike.


Four days of music, eight days of camping. If you need a holiday and love music, this might just be the ideal destination. For more information on the lineup and information on tickets visit www.fiberfib.com.
Alex