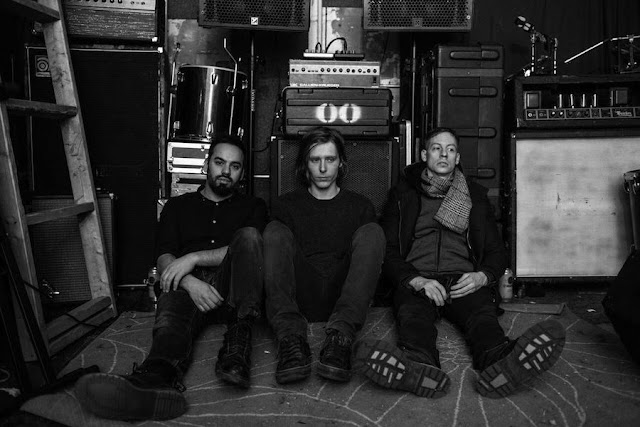 As I write this, the sun is shining with the UK experiencing its first "Heatwave" of the year (and hopefully not its last). What better way to bask in this glorious weather then, by listening to some industrial sci-fi electronica?

Odonis Odonis are a three-piece hailing from Toronto whose new album, Post Plague, is released June 17th on Felte. Whilst many bands find inspiration for their music in the form of day to day activities or relationship issues, Odonis Odonis find their's in more obscure territories.

Let's take their track Nervous for example, which you can listen to below, here's what the band have to say about the inspiration behind it's dark atmospherics...

"Since the beginning of human existence, mankind has obsessed with creating perfection, but the flesh will always remain flawed. We now live in an era where we can selectively post on social media and create an idealised version of ourselves to present to the world. What if you could take that one step further? What if you could be the perfect version of yourself? Take a full body image scan of yourself at your favourite age and transplant all your favourite memories into a perfect Avatar of one's self. Sounds crazy but all of this is around the corner and things are about to speed up."

Oh yes, forget your traditional ideology, this is a band with big ideas and even bigger imaginations. The band agreed to answer the now infamous "Introducing" questionnaire, the answers of which you can read below. Have a read and then check them out, you won't be disappointed.


Hard to say one, but... Ministry - Twitch was definitely a starting point for our new record. We listened to that record a bunch on tour it's such a killer weird experimental record. It rides a weird line between new wave, dark pop and early industrial dance.

I'm not a hater but if a another person tells me how good the new Justin Bieber is I'm gonna lose my shit. Gotta handed it to there PR team for re branding him to appeal to art school indie kids.

I sucked at sports

New record, new videos and getting back on tour. It's cool to see it begin to unfold

You can never go wrong with Fuck

There is no substitute for hard work - Thomas Edison

Here's a good one that I just Googled. If you have the opportunity to play this game of life you need to appreciate every moment. a lot of people don't appreciate the moment until it's passed.

I already do post effects, composting and editing for TV and Film. Music isn't exactly a cash cow in 2016