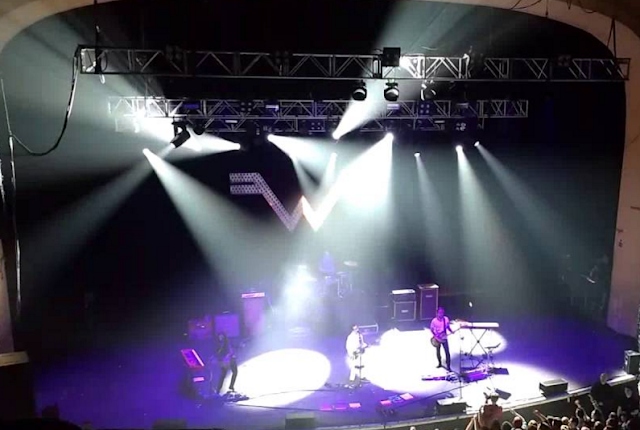 Just a slight disclaimer before you read any further. I was very ill at this gig and as a result may not be the best person to document what accurately happened...nevertheless let's give this a whirl.

Weezer hardly ever play in the UK, it was five years since they last played a London show and are not expected to return to these shores (bar the odd festival appearance) for years now. Having just released their tenth studio album, the band were ready to play some of their new tracks in front of a live audience as well as some old classics.

As is usually the way, the band start off with some new material, California Kids, a rock pop stomper in keeping with the sound of the "White Album" which consequently sounds like an aged version of the "Blue Album".

The venue was unusually hot that night, it was a sold out show so a capacity crowd, but god damn...anyway sorry we're off topic.

We get our first taste of classics in the form of My Name is Jonas and Hash Pipe, a double barrel that frankly levels the academy. At their best Weezer really are untouchable, they have rock bangers to spare and play them at a volume that makes the walls bleed.

Once the crowd jumping has subsided, the temperature has hit an all new level, I'm looking around to see if anyone else is troubled by this oven like temperature, but they don't seem to mind. I manage to make it through Back to Shack before retreating to the bar for a glass of water.

Water is annoyingly expensive, £2.50 for a bottle! Turns out you could have gotten tap water for free, but the bar staff assumed I wanted the expensive bottled stuff...which is nice of them.

Back to the gig and the band are rocking out to El Scorcho, which is extremely fitting considering the sauna like heat I'm standing in. Once again the crowd are going nuts, Pinkerton always was a cult classic of an album and the ovation this track receives proves the love for it is not going away.


Things start to get a bit wavy around this point, the band play The British Are Coming which doesn't go down well before launching into Pork and Beans which features a Spandau Ballet interlude and confirms that I must be losing my mind because of the heat.

By the time Do You Want to Get High? rolls around I'm in full on meltdown mode...not helped by the copious amounts of weed smoke slowly making its way through the academy.

I retreat for some more water, forgetting to make sure it's tap and lose another £2.50 for something I could literally have gone to the bathroom for.

Whilst this daylight robbery is going on the band have run through some more new tracks before breaking into one of their biggest hits Say it Ain't So. It's a track which incites one of the loudest singalong's of the night and breaks through my feverish blur and makes the world feel right again for three short minutes.

There are more highlights on the way, but are marred by the fact I've had to retreat to the back of the academy and watch from way back, out of fear I'll collapse otherwise. An appalling end to what I'm sure to a normal person was a great gig.

My first ill gig experience was not great, and I'd recommend anyone not feeling 100% to stay away from music venues altogether to avoid disappointment. Weezer, I'm sure we'll meet again and I promise to be fighting fit when that time comes.

Set list
California Kids
My Name Is Jonas
Hash Pipe
Back to the Shack
L.A. Girlz
El Scorcho
The British Are Coming
Pork and Beans
(If You're Wondering If I Want You To) I Want You To
Do You Wanna Get High?
Cleopatra
The Waste Land
Thank God for Girls
Say It Ain't So
The Good Life
You Gave Your Love to Me Softly
King of the World
Island in the Sun
Undone - The Sweater Song
Beverly Hills
Buddy Holly
Alex