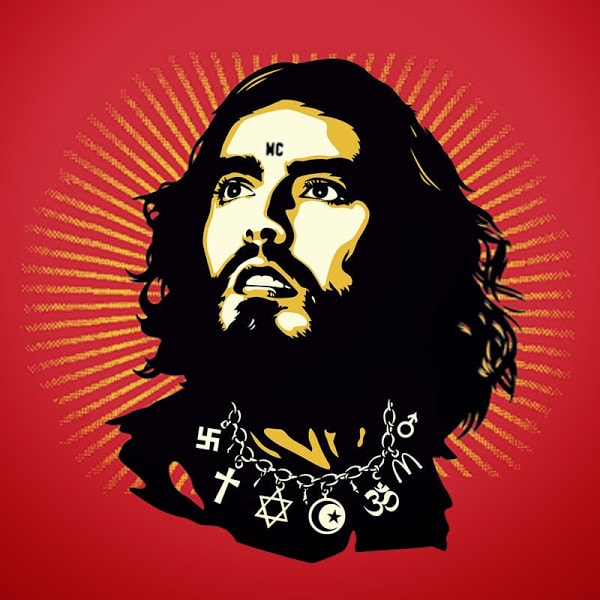 Say what you like about Russell Brand, he is undoubtedly an articulate man. His latest book Revolution displays that fact perfectly. Filled with spiritual discourse, political theories and a lexicon as wide ranging as any academic text; it's an interesting and at times bewildering read.

There is one section however that particularly stands out.

Known famously for his womanising shenanigans, Russell delves into the more deep rooted reasons for this promiscuous behaviour, breaking the glittery image of what we see plastered in the tabloids and revealing the stark reality of the situation. It's a beautifully written and effecting read.

Have a read for yourself below...

*
Does it sound a bit phoney when I say that in my Grand Prix of priapic glee I was actually seeking salvation? Does that sound like something you might hear in a Southern Baptist church or a South London gospel gathering - or worse, a treatment centre for sexual addiction?

My research in this area has been quite thorough and I'd say my findings are quite conclusive. I've engaged in scenarios that from the outside, looking in, when I was an adolescent in Essex, would've been indistinguishable from Eden. Looking at a papped shot of myself from a London nightclub at 2 a.m. with a blonde on each arm and shades on, I can still be deceived into thinking, "Wow, I'd like to be him", then I remember that I was him.

Brought up on Frank McAvennie and Benny Hill and Carry On on the telly, it's easy to understand how a mental plan is formed. I can't unsee the truth behind the photograph, the reality behind the veil. That night with those two immaculate girls, delivered from Babestation, via some club in Hanover Square, did not feel like it looked.

When I got back home to the house that I'd dutifully purchased and done up like a space-age Byron would've: flock black wallpaper, shag-pile carpets, Jacuzzi - ah, the Jacuzzi, lowered in the garden by a crane, that gurgled like an oracle in my garden, murkier with each new sacrifice. A TV in every room, a yoga studio with a wipe-clean floor, but unless you do the yoga you don't get a wipe-clean mind.

The girls come in and drink wine. I don't drink wine, so I don't spill wine but they do. The humanity will not be silenced as we kiss; nagging angels burden me with their invitations. Glasses get broken like promises I was given, given then and given when I took these ideas on board.

Kisses are exchanged and lips get derivatively bitten and I am unsmitten and unforgiven and when they leave I sit broken and longing on the chaise. The glass window above the door says No. 1 - number one Gardnor Road; it casts a shadow from a street lamp and on the wall it looks like "No 1, no one", as my mate Matt observed, and I am alone but for the cat.

Even though, when it works, after I rip it up in front of 3000 at the Brixton Academy and I head back with a netball team from Essex, all Fays and Tracys refracted from Grays, and "faces" after the mandatory Jacuzzi, I look up at them from the quilted mortuary slab of my chamber as they pick over me like thwarted but amused surgeons, I watch them through anaesthesia and pray amnesia will help me forget what I'm doomed to regret. Like perfumed and glossed vultures they peck my carcass and a petit mort is insufficient; I am like Frankenstein here, assembled from boneyard parts.

Other people's limbs and thoughts, stitched together and jerked to life.

Why is this not working? Was Sam Fox lying? Is Hugh Hefner lying? Is everybody lying? They look like broken toys to me, like an unlicensed Pitsea Market ET whose finger don't light up, given to me, sat on my knee.

I don't want to be led back to that, I want to be delivered from evil. For thine is the Kingdom, the power and the glory, for ever and ever.