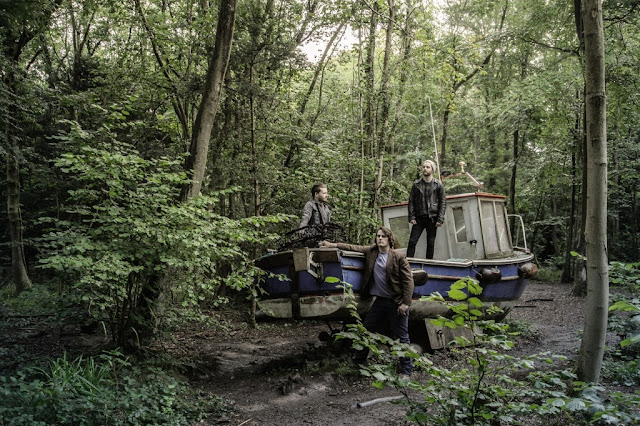 Introducing Armchair Committee, a three-piece rock act from Bristol. Armed with riffs worthy of challenging the best of the rocks acts in the UK. The band are set to release their new single Rawgabbit on December 11th.

Having shared stages with the likes of Jim Jones Revue, Young Guns, and Royal Blood, the band create a dynamic blend of punk rock energy and skewed melodic blues. The new single was recorded at the legendary Coach House Studios, Bristol, produced by Tom Dalgety (Turbowolf / Dinosaur Pile-Up). The band have just released their latest music video which you can take a look below...

Tom from the band was kind enough to answer the now infamous introducing questionnaire. Check out his answers below in which he reveals his wide ranging music taste, the hypocrisy of Kanye West and introduces a great new swear word to the world...

I’m one of those idiots who claim they listen to ‘a bit of everything’ but what I really mean is that I listen to a wide array of rock, folk, jazz, blues, country, bluegrass etc. Usually stuff that is played on things with strings.

I don’t listen to any modern R’n’B nor do I spend my Friday evenings raving away to EDM.

So, when I get asked about my favourite album, I have to appease all of the different sonic flag-wavers in my mind.

I think Closing Time by Tom Waits does a good job of ticking all my boxes. From a musical point of view, it’s a perfectly crafted album. If you were to draw or paint a visual representation of that album, it’d be a smoky jazz café at 3am on a crispy-cold Saturday night in New York, as the last few hangers-on lazily drink away at the bar, imparting nuggets of fact-less wisdom on one another. I like that.

From a production point of view, the album is organic and contains little imperfections all over the place – I think that’s really important in order for the listener to connect with the album on a human level.

I expect I haven’t heard my least favourite album as I expect it was released by an artist who I wouldn’t go near. Though, if I were to speculate, it’d be an album by someone who either doesn’t write their own songs and relies heavily on a big songwriting ‘team’, or someone who is heavily robotisized in the studio through the use of autotune or other modern production techniques in lieu of any concrete musical ability.

I really, really don’t like it when an ‘artist’ is merely a vehicle propped up on stage by lights and pyrotechnics, blurting out songs constructed via a series of memos between A+R suits.

We’ve all been making music separately since we can remember. Dave (bass) and I started playing music together at college in Cheltenham and moved to Bristol following a stint in the States where Armchair Committee was born.

Upon our return to the West Country a couple of years ago, we auditioned drummers, settled on a sound and set about systematically disrupting people’s Friday and Saturday evenings.

Getting the album out there early next year and then getting more songs written and recorded.

Writing new material and playing it live is probably the most exciting thing about being in a band.

‘No more running, I aim to misbehave.’ Originally proclaimed by the famous modern philosopher Capt. Malcolm Reynolds aboard Serenity.

I don’t pay attention to much he says but it was very difficult to get away from his recent spoutings at Glastonbury.

“You are watching the greatest living rockstar on the planet”

The irony of that statement being in the same set as that cosmically-failed rendition of Bohemian Rhapsody was genius.

Awesome astronaut superhero rocket man boy. Why…? Because someone has got to do something about all those space cowboys illegally mining the xenocryptite on Mars.

Daffy Duck’s speech therapist. Ain’t nobody got time for that.


“You look surprised to be here. Of course I didn’t need you to go to church every weekend - take a seat next to Satchmo over there – he’s been waiting for you.”