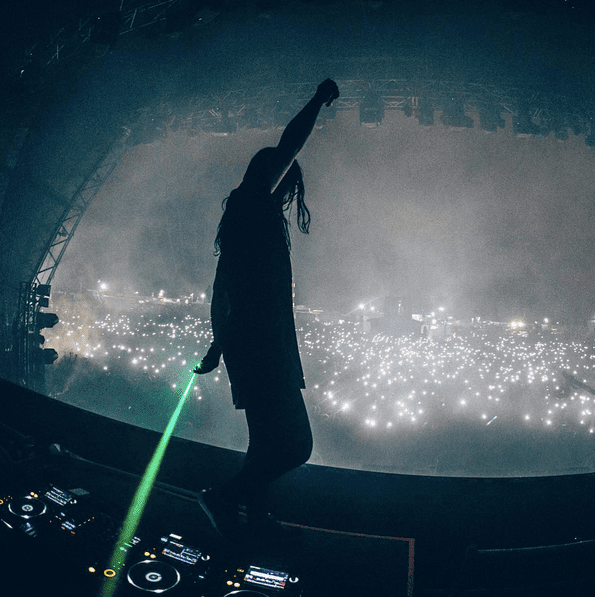 Clapham Common in London. For August bank holiday weekend thousands of EDM obsessed fans descend upon the park to wreak havoc. SW4 festival is in it's sixth year and is fast becoming a staple in the calendar for electronic music fans.

The Sunday line-up was impressive. The RAM records tent kicked off from the very beginning with Culture Shock and Loadstar ensuring that any early ravers were well and truly catered for, whilst over on the main stage Basement Jaxx unleashed a guitar playing gorilla, ballerinas and hits galore, saving the mammoth Where's Your Head At? until last triggering mass hysteria.

Jaguar Skills threw records out like crazy during his set, and despite sound issues managed to get one of the biggest crowd reactions of the day.

Sounds issues were unfortunately a bit of a recurring issue on the Sunday. With the local council taking issue with the pure volume of the festival, a noise restriction was put in place meaning many acts were left feeling a little underpowered. Drum and bass mastermind Andy C in particular had the high end of his tracks almost entirely lost to the crowd.

However as the day went on, the organisers let the restrictions relax a little, meaning Armin van Buuren could unleash their trance monk show Gaia with full effect. It really was quite a show, with the DJs buying into the performance 100%, the pair were an intimidating sight clad head to toe in robes. It really is a jarring sight to see monks blasting out trance anthems...

The day however belonged to OWSLA founder and dubstep dominator Skrillex. His set was pure lunacy. Pop culture references, crazy visuals and apocalyptic dubstep sounds. Lasers, pyrotechnics and electro house rhythms. Having been denied the chance to perform at Notting Hill carnival by the police, Sonny had a point to prove that his music was a power for good not evil.

And boy did he deliver. Bringing a host of his own hits, remixes as well as tracks from his Diplo collaboration Jack U, the DJ created a party atmosphere that even Notting Hill would be jealous of. At the end of play, the crowd were in awe, still trying to process what they had just witnessed. That's how you do it.