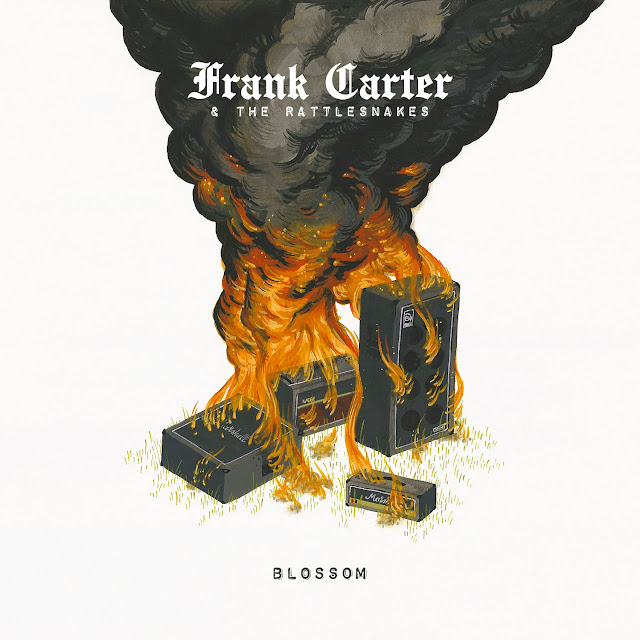 The artwork for the debut record from Frank Carter and the Rattlesnakes is an apt visualisation of the sonic barrage that's about to be unleashed upon its listeners. Entitled Blossom, it's the sound of strained vocal chords, burning amps and eardrums bursting.

If you've been a rock fan for the past ten years, you should be well acquainted with Frank Carter. Formerly the frontman of Gallows and Pure Love, the professional tattoo artist turned punk saviour is back with a crew of established rock and rollers who have a new set of adrenaline rising cuts they want to share with you.

Juggernauts wastes no time in getting amongst it, with a riff that can be described only as "crushing". It's also clear from these opening few minutes that the rattlesnakes is a different beast from any of Carter's previous outings.

Combining the untameable rage of Gallows with the melodic tendencies of Pure Love, Frank Carter & The Rattlesnakes are an outfit with lofty ambitions (even if they don't admit it) and tracks crafted not just through passion but experience.

It's a combination that's evident throughout the record. Fangs uses a classic punk riff as the foundation for a tale of beying lust so pure Carter sounds more animal than man whilst on Rotten Blossom, the frontman takes the form of a rabid philosopher, pondering the afterlife in a way that showcases his songwriting ability as well as his brutal voice.

Blossom isn't afraid to tackle taboo subjects either. Trouble places religious fundamentalists into Frank's firing line whilst the amped up version of Loss paints a picture of utter despair, a scenario so bleak it rivals Grey Britain track Misery in terms of depression factor.

All in all, Blossom pulls no punches. The musicianship, subject matter and delivery are all full on, with emotion and aggression turned up to 11. Venues beware, amps across the country are about to be set alight.

Welcome back Frank, we've missed you.