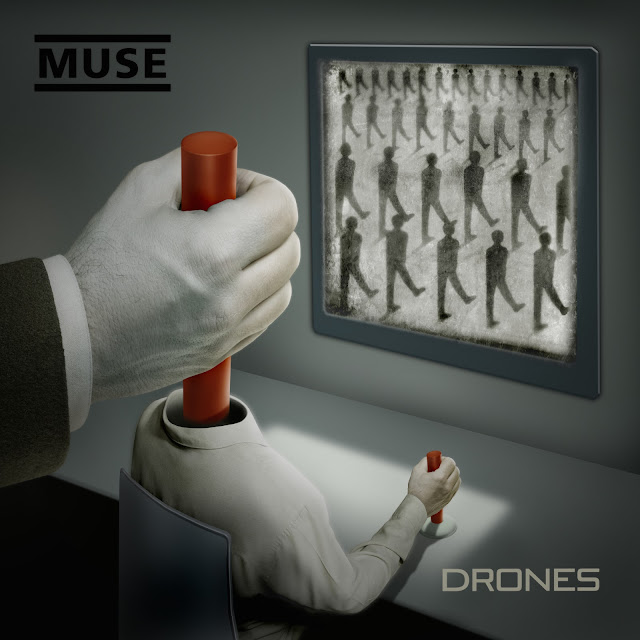 Drone; noun. Definition - "An unmanned aircraft or ship that can navigate autonomously, without human control or beyond line of sight".

Drones are the future. As the human race strives for faster, easier ways of delivering items; as well as completing some less savoury objectives which we'll get to later; it's only a matter of time before our everyday lives are polluted with these autonomous machines.

Matt Bellamy has been pondering this vision of the future for some time now, and like most things the Muse frontman ponders, he has come to some terrifying conclusions.

These terrifying conclusions form the back drop of the rock trios seventh album. It's a backdrop full of killing machines. Robots with no one to answer to and with one mission. KILL EVERYONE IN SIGHT.

Entitled Drones, the stadium fillers latest effort is a concept album following the story of a disenfranchised soul, manipulated by the powers that be into a killing machine, before finally breaking free and fighting back against the system.

Playing out like an audible Shakespearian tragedy, it's a quintessential Muse album, one for the fans. Drones gets back to the dystopian themes set in Absolution, harks back to riffs and ideas from the beginnings of the band, whilst also exploring and taking advantage of their modern day role as the worlds biggest cult act.

Dead Inside starts things off, industrial/techno vibes nodding to Trent Reznor and Gary Numan quickly subsiding to the howls of a drill sergeant signalling the start of Psycho.

Featuring a riff that has been floating around since 1999 it's a good ol fashioned rock stomper, the kind that Muse have been producing less and less of recently. It's an aggressive version of Uprising and features the downright ridiculous lyric "your ass belongs to me now". Great fun mind.

Mercy is a highlight. Massive chorus, catchy piano and ominous references to the men in cloaks. First three tracks, first three singles. That's radio sorted, it's time to get weird.

Reapers is full on hair metal hammer ons and Morello-esque breakdowns. It's worth noting at this point in the narrative, the protagonist is a full on killing machine and the music does a great job of representing that.

Referencing the predator missiles otherwise known as "Reapers" or "Hawks", the track features a guitar solo straight out of the Van Halen song book. It's a hell of a ride, climaxing in a full on head-banging cacophony.

Handler summons yet more rock goodness, Bellamy seemingly falling back in love with his collection of fuzz pedals on this album, leaving the synthesizer to one side.

The 35th president of the United States makes a guest appearance in the next track. John F. Kennedy's rousing tones are accompanied by a build up of electronic thuds and orchestral strings before Defector kicks in.

At the start of their career, Muse were accused of sounding a bit too much like Radiohead for some critics liking. Having successfully shaken off that label, it now seems as if they have a new comparison to battle against, that of the mighty Queen.

Defector features harmonies that sound remarkably similar to Mercury and co. It's not a bad thing, in fact that's the best part about the entire track, it's just so similar that it's impossible not to comment.

Anyway moving on and we have Revolt and...well it sounds even more like Queen than the last track. Artists often cite comparisons as lazy journalism, and for the most part I'm inclined to agree with them, however, I call like I hear it. The combination of power pop and theatrics create an undeniable likeness to Freddy's crew.

We've reached the final stretch, and it starts with a misfire. Muse can do ballads, Soldiers Poem being a perfect example. Unfortunately with Aftermath, the band stray into the wrong side of the balladry spectrum. Think X Factor winners song. Oops.

Things soon pick up, The Globalist is a ten minute track inspired by spaghetti westerns, prog rock and has been billed as the sequel to fan favourite Citizen Erased. Although not the tour de force that explanation initially makes it sound, when it gets going, it really gets going, exploding into a barrage of riffs. Undeniably home to the heaviest moment on the album.

After the bombast, the power pop, the ten minute epic, the industrial techno and everything else this album offers up, it ends in a morose manner. Final track Drones features a choir of Matt Bellamy's chanting "My mother my father my son my daughter. Killed by drones". It's beautiful, and yet chilling.

Drones is an impressive body of work. Unlike their previous album The Resistance, which was based loosely on an Orwellian concept, Drones fully buys into the world of whats happening. From the storyline to the overall atmosphere.

They've done away with a lot of the added extras, there's no bass clarinet, no jazz trumpet and no 50 piece orchestras for a start. Despite this, there is still more than enough bombast involved to keep fans happy, and with the added fuzz pedal and a healthy helping of riffs, rock fans will come away feeling sated.

Get ready for war. Here come the drones.