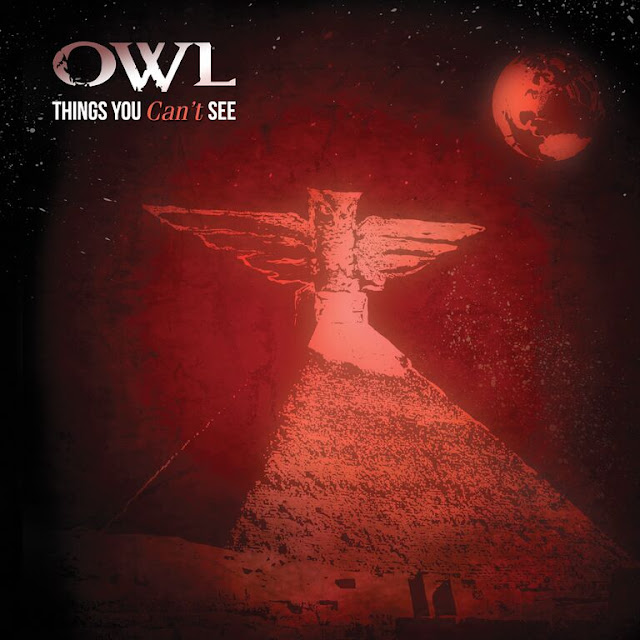 How good is the band name Owl? What's in a name you might say, after all, there are plenty of bands with great names who sound terrible. Fortunately this is not the case for the Los Angeles trio who are set to release their third album Things You Can't See next month.

Consisting of Chris Wyse (bassist of Ace Frehley Band, formerly of The Cult), Dan Dinsmore and Jason Achilles Mezilis, Owl are a full on rock band who take no prisoners in their delivery. The new album was recorded at Overit Studios in Upstate New York and was produced by Chris himself.

Guitarist Jason Achilles Mezilis was kind enough to answer the infamous "introducing questionnaire" and goes to town on a few of his pet peeves, as well as recalling my new favourite inspirational quote.

Check out his answers below!


Fair Warning by Van Halen. It is the greatest album by the greatest American rock band of the 20th Century...there is no way to understate the brilliance of that record, from any standpoint. Writing, performance / innovation, swagger, tone and recording...it's all A+

Any Counting Crows record. I just can't listen to that guy sing. It's nails on a chalkboard to me. I've heard people cover their songs and it doesn't bother me at all, so I've narrowed the field of offence down to the presentation.

3. What made Owl start making music together?

Owl has been a dream / brainchild of our singer and bassist Chris Wyse for many years, but with myself and drummer Dan Dinsmore, it was basically Chris reaching out to his long-time musical friends, that he had a history with, knew and trusted, to help him get his musical vision across. And we were both excited to be a part of it, and were both I think very enthusiastic about the music he wanted to make.

The upcoming tour dates with Owl, particularly our dates with PHILM (feat. Dave Lombardo of Slayer). It's going to be a crushing musical billing that I am very excited and honoured to be a part of.

Shit. It goes back to when I was a kid. I heard my cousin say it around his parents when he was young, and he didn't get in trouble for it. It sounded so cool the way he said it. Plus it's rather benign, you can use an expletive without offending most folks too bad, but still get the emphasis of your point across.

I don't know if it's "inspirational" or not, but my friends and I often have full conversations involving almost nothing but movie quotes. One of my favorites is from “Spaceballs": "We're not just doing this for the money...we're doing it for a SHITLOAD of money!!" (see above answer)

I interviewed for a position dealing with motion graphics tracking at a high end digital effects company when I first moved to LA (at my best friend's behest) and did well in the interview. They offered me the job but ultimately I turned it down because it would have not allowed for the time I felt a full fledged music career was going to need. Besides that, if not for my music degree in college, I would have pursued either astronomy, cosmology, or astrophysics. But music is how it turned out.

Any legal or business-oriented "soul crushing" line of work. Obviously half of music is "business" but that's more of a personal nature. I fell in love with a lawyer once, and she would often remark that her line of work was "bad for the soul"...yikes. I realize it all has to be done. It's just for someone of different emotional reserve than myself.

Owl's third album "Things You Can’t See" is out on July 28th.