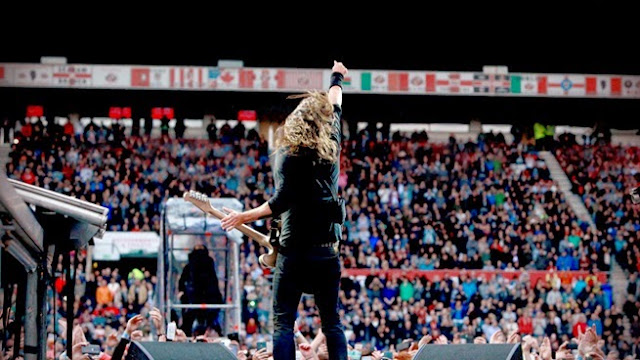 Dave Grohl, aka the nicest man in rock n roll. It's a title he didn't bestow upon himself, oh no, it's a title he earned by being the kind of guy you'd like to be friends with. Even in front of 45,000 people, the Foo Fighters frontman is aloof, joking around with the audience and acting like the host of a particularly rowdy house party.

That's one of the joys of being at a Foo Fighters gig, not only do you get to enjoy some rock music, but you get to hang out with Dave.

Anyway thats my blog on how much I like Dave Grohl...I should probably talk about the gig itself now.

Following support from The Strypes and the Kaiser Chiefs, the Foo Fighters did what they do best, ploughed through their hit laden back catalogue for an entire two and half hours.

It's quite an experience being in the company of a band for so long, with the average show usually stretching no longer than perhaps the 90 minute mark, many gig goers where physically fatigued by the final whistle.

Kicking off with Everlong, Monkey Wrench, Learn to Fly and Something from Nothing, there was a slight worry the band may indeed burn themselves out early, leaving themselves with nothing but album tracks to end on. Of course, this isn't the bands first rodeo, and after the initial burst, things start to settle down into a more calculated affair.

There was the obligatory stadium set acoustic segment, featuring a rendition of My Hero and a few other singalong opportunities. The band then unveiled a rotating mini stage ( because why not), where they showcased some of their favourite rock classics, including covers of AC/DC, The Police and Queen.

Being the first show of the tour, Dave admitted we were "guinea pigs" for certain parts. The return of But Honestly to the setlist, an accordion (eh?) accompaniment to Skin and Bones and most of all checking to see if they could actually get through the 30 songs in the allotted time. Turns out they fell short by four songs, probably not helped by the eight minute versions of some of their hits showcased.

As the band returned to the main stage it was back to business, All My Life sparked mass moshing, Times Like These had the masses swaying to and fro and Best of You sparked the biggest celebration since Sunderland avoided relegation.

With only a few weeks left before the band headline Glastonbury, its safe to say Worthy Farm have booked well. One of the biggest rock bands in the world are on top form and are ready and raring to go. Eavis and co watch out, the foos are coming for you.