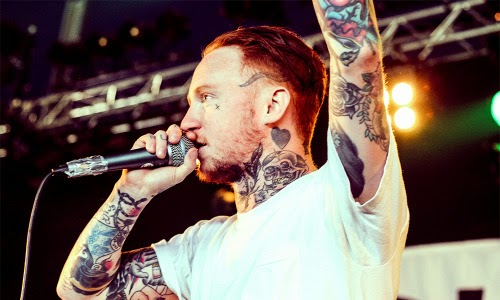 From the Gallows of Watford to spreading the word of Pure Love across the globe, Frank Carter is a punk rock icon for this generation. Having destroyed stages across Britain with aggression and vitriol before expanding his repertoire with a more diverse set of songs, he's back with a band called Frank Carter & The Rattlesnakes, a project he's calling redemption for those who wrote him off in the past.

Talking to Daniel P Carter on Radio 1 Frank explained how the rattlesnakes came about...

"I think I'm really angry, I think that's the key. People change, people grow, people embrace certain things in their lives but one thing that's never left me is, I've always been a fairly angry person an outspoken person. I think there's a big gaping hole for real, true punk rock at the minute. And that's why I'm back."

The band is made up of Dean Richardson of Heights on guitar (and on co songwriting duties),  on Bass is Tom Mitchener who runs Broadfield Studios in Watford and on drums is Memby Jago known from Ghost of a Thousand fame.

The band have announced a string of shows starting in the beginning of June and a debut outing on the 14th of May at Sang Bleu in London. They've also announced the Rotten E.P, which features three tracks including the debut single Fangs.

Fangs (which Carter has confessed was written about his wife on their wedding night) ticks all the boxes. It's a fast and furious 2 minutes 30 seconds which features Frank Carter trademark growls giving the track and edge which has been missing from the UK rock scene for far too long.

Get ready to shake your hips from side to side, because the rattlesnakes have arrived.