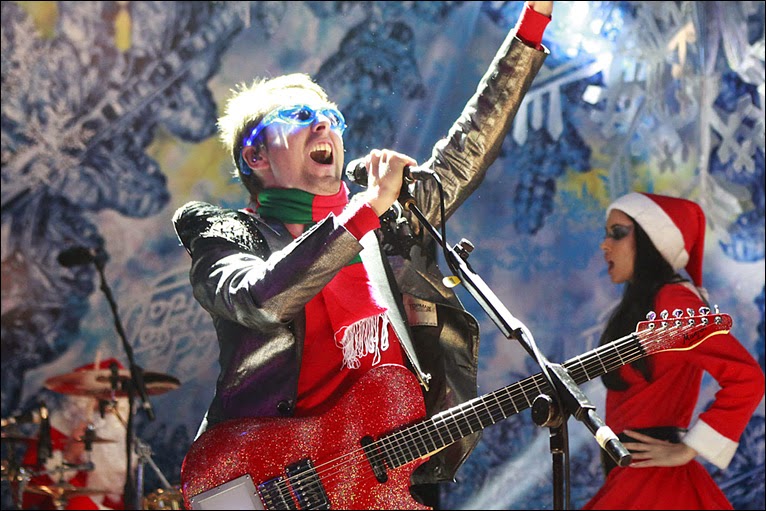 Let's face it, Christmas is not a rock n roll holiday. That's just a fact we're all going to have to come to terms with. Garish jumpers, Mariah Carey on repeat and good will and happiness preached from all corners. Not exactly sex, drugs and rock n roll is it?

I'm not complaining to be honest! It's nice to have a period of wholesome family fun, it's a nice period of respite before the unholy celebrations of New Years Eve, that are guaranteed to bring the country to a stand still for at least 24 hours.

Still, the rock fan can suffer withdrawal symptoms through the festive season. They'll start to yearn for fuzz laden guitars and crunching riffs. That's why I've prepared this list of 10 rock tunes that stay true to the festive theme, but also have a bit of an edge to them as well.

1. Lower Than Atlantis - Merry Christmas (Wherever You Are)

Great tune and a massive chorus. This is a modern classic and I can see it getting more and more popular as the years go on. Criminally under played when it was first released 2 years ago.

This was always going to make the list. Yes, I know it's The Darkness, and yes, I know liking them is something of a social faux pas, but it's become a bit of a classic for rock fans around this time of year. Released at the height of their powers, it was beaten to the top spot by the misery fest that was Gary Jules' cover of Mad World. Cheery!

Marketed as the heaviest Xmas song ever, Reuben decided that sleigh bells was all they needed to add to their traditional formula to make things Christmassy, that and a few lyrics about the big day. The perfect track to test out on any new speakers you may receive on the big day!

The Slade classic given a sleazy stoner rock reworking courtesy of the rockers from Leeds. It's exactly what it says on the tin really, you know the song and you know the band. A match made in heaven.


Stone cold classic. I don't care if you've heard it a million times before, it's time to listen to it again.

Mark Hoppus singing about his anger towards Christmas carollers and Christmas cheer in general. If you're a fan of their humour, signature guitar lines and choruses than you'll love this. Bah humbug but in the nicest way possible.

7. The Ramones - Merry Christmas ( I Don't Want to Fight Tonight)

The Ramones throwing their power chord expertise behind the festive season. You can't not enjoy this tune.

8. The Killers - Don't Shoot Me Santa

When The Killers first came up with the idea to release a brand new xmas song every year, there were more than a few cynics. However, the Las Vegas rockers have stayed true to their word and this effort from 2007 is one of my favourites. The tale of a homicidal Father Christmas, Brandon and co have created something that worked perfectly alongside the Sam's Town era of their output and still stands up today.

9. Julian Casablancas - I Wish it was Christmas Today

Julian Casablancas, one of the coolest people alive donned a white suit and recorded a Christmas tune. It doesn't sound right does it? But somehow he comes out this affair with his reputation intact. It takes it's cues from First Impressions of Earth era The Strokes output, particularly their b-side Hawaii, which is the summery alternative to listen to during July and August.

Ray and Dave Davies celebrating Xmas together by reciting their childhood memories of the big day in song. Classic Kinks, complete with guitar solo and amazing DIY video.
Alex