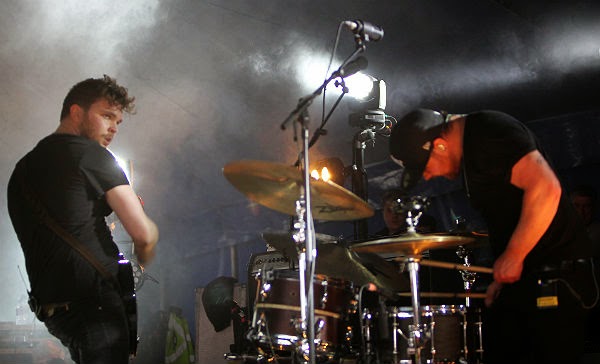 Going to see one of the most talked about bands in the world is an interesting experience. It can be broken down into stages...

Stage one - Surprise. When you first get the tickets it's a massive surprise because they sold out in five minutes and Twitter was alive with the sound of people who failed to get them in time.

Stage two - Excitement. You're excited because this band have been packing out audiences of thousands and they'll probably never be this buzzed over ever again.

So far so good... until stage three, a stage I call 'Uncertainty'. You start to question if this band really can live up to all the hype that surrounds them. Can they fulfil the elevated expectations and put on a show the audience won't  forget?

Like all psychological stages the final stage is 'Acceptance', when you enter the venue and see the setup, all the uncertainty fades and belief sets in, before you finally agree that whatever happens, it's going to be an experience.

Royal Blood was certainly an experience.

At 23 I'm not used to being one of the oldest in attendance but that seemed to be the case at the Riverside, the radio 1 buzz clearly pushing the age demographic down to almost absurd levels. Not that this is a bad thing, Royal Blood have been touted as the future of rock n roll, so an average audience age of around 40 would have been a contradiction to that statement and made things a bit awkward.

After being forced to reflect on where my teen years went thanks to the whippersnappers in attendance, things picked up when the band arrived on stage and flew straight into b-side Hole. It's a blueprint for the rest of the night, riff led rock with a love for distortion. The band are tight, hard to believe its only been a couple of years since they started playing together.

Come on Over is the first single of the night to be aired and sparks the crowd into life, those non-plussed with the opener soon chime in. The next big moment is Figure it Out, an unfathomably good track and the song of the summer. It's one of the highlights of the set, the outro alone is worth the ticket price. Better Strangers is proof that the crowd aren't just familiar with the singles, but devout fans of the debut album as well. It's a bluesy number with a catchy chorus and the perfect tempo for grooving along to.

"Lads make sure your looking after those ladies tonight"- Wise words from bassist and vocalist Mike Kerr who is more than aware of how rough and ready small club rock shows can get. No more so than when Little Monster kicks off, it's one of their strongest tracks and will be a staple in their set for years to come. Fortunately no ladies were harmed during the song (as far as I know).

The Jack White loving Careless comes and goes without much commotion whilst new single Ten Tonne Skeleton is a reminder that when it comes to heavy riffs, there is no band doing it better right now.

By the end of the set and Out of the Black rolls through like a tropical storm, the audience is well and truly spent. The Mercury Music Prize may have come and gone to Young Fathers, but it shouldn't bother the band too much. Selling out UK tours, playing to packed out festival tents and topping the UK album chart should more than make up for the lack of a poxy trophy.

Whilst the critics prize may have eluded them, mass adoration hasn't. It means less interviews and more time out doing what they do best, playing rock and roll shows. The future of rock n roll is in safe hands. \m/