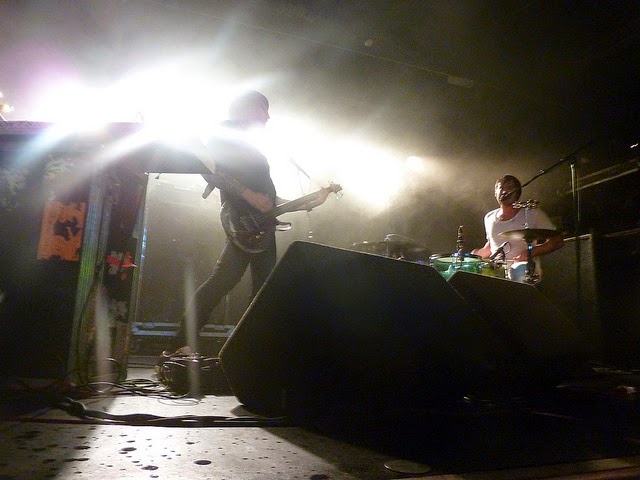 Having first listened to Death From Above 1979 back in 2005, I was disappointed when I read that they were no longer performing together. Both members going there separate ways and leaving me with one album of pure power to obsess over.

You can imagine my joy then, when last year I heard the news that not only were the twosome from Toronto joining forces to play some shows again, but were also releasing a follow up to their masterpiece of madness You're a Woman, I'm a Machine.

In case you haven't heard it yet, their second album, The Physical World, was a triumph. Not only did it feature the same formula of the bands debut, it built on those foundations and produced some of the best songs the pair have ever written. But that's enough about the album, if you want to read more I did a review of it here.

So they've got some new songs, but has their live show maintained the intensity from which their shows were famed for 10 years ago? From the opening bass squeals of Turn it Out, it's clear that this is a band working from the same blueprints that brought them rave reviews 10 years ago. It's fast, furious and extremely loud.

I don't know if you've been to The Plug in Sheffield before? It's a pretty small (but great) venue which was not built to survive the sounds coming from Jesse F. Keeler's gigantic amp. The walls shook, the crowd jumped and thats pretty much how it things stayed for the entirety of the show.

Right On, Frankenstein! is the crowds first taste of material from their second album, it takes a more precise and less frenzied approach to proceedings whilst still eliciting chaos from the crowd. Virgins continues the LP 2 love in before Cheap Talk finishes is it off, three of the best tracks off their second record crammed into just under nine minutes.

Around 10 songs into the show I started to realise how ridiculous it was that a band of this magnitude were playing to a capacity crowd of around 200 people. It's not like this is a band lacking in ability or a back catalogue, this is a critically acclaimed outfit who announced their return by playing the main stage of Coachella.
Later in the set Trainwreck 1979 spurs the crowd into yet more delirium whilst rarity Dead Womb gives the hardcore collective two minutes of rabid riffing that they've been waiting to see for 10 years.

The biggest reaction of the night is saved for Romantic Rights, the stop start intro is the cue for mosh pits and circle pits to pop up all over the shop and from there things got increasingly frenetic. Drummer and vocalist Sebastien Grainger builds anticipation before the finale of the track, repeating the songs mantra "come here baby, I love your company, we could do it and start a family" over and over until the dance-floor resembled a baying mob before finally dropping the chorus.

The show comes to an end with the title track of their second album The Physical World which ends with an apocalyptic sounding riff. It's something that wouldn't sound a miss at a Metallica gig.

It's a fitting end to a night of death disco, the likes of which may never be heard in the UK again.