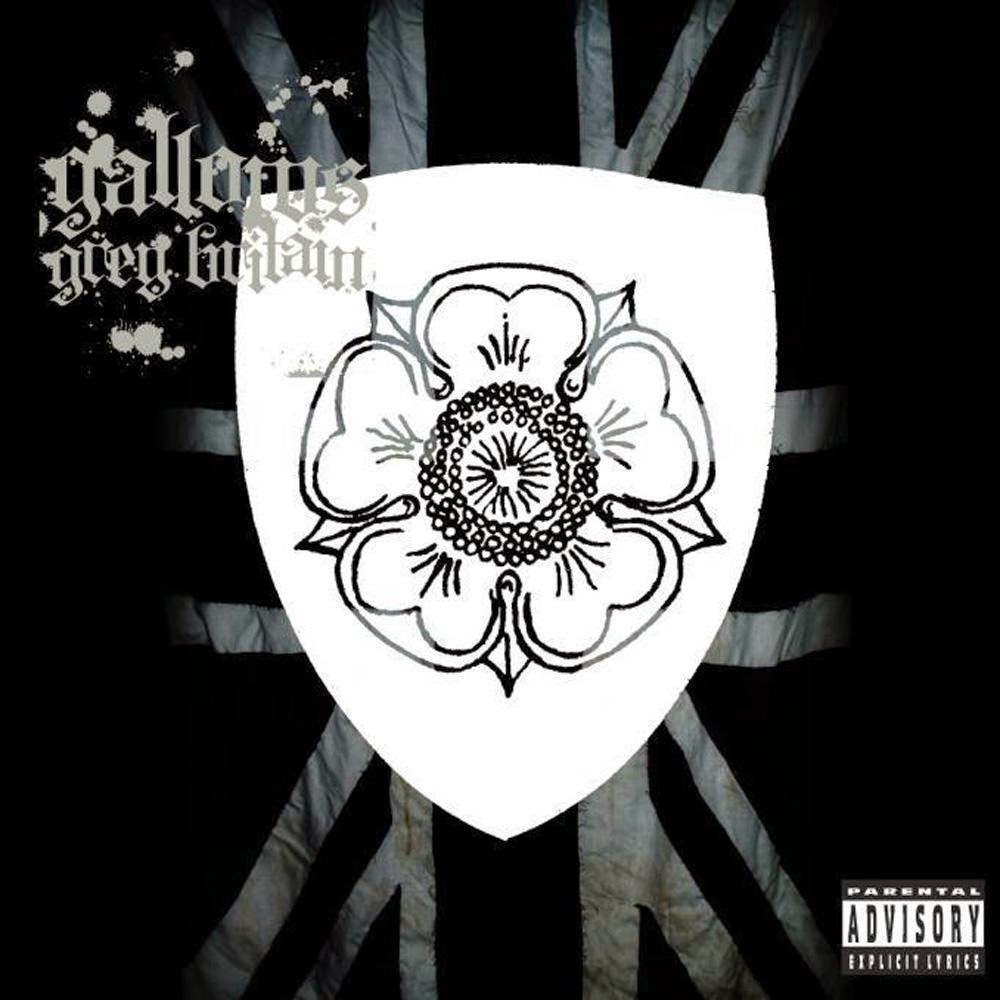 Once in a while a band comes along that will re-define your thoughts on a particular genre. From a young age my idea of punk music was heavily swayed by the 90's American pop-punk movement. Catchy hooks, juvenile humour and hair gel seemed to be the order of the day and I'll admit, for a while that's as far as I bothered to explore the genre.

Of course as time passed and my musical horizons broadened, I was introduced to the conception of the movement in the 1970's and began to love the bands who started it all. The Sex Pistols, The Clash, The Ramones etc. I learned to love not just their music but the message behind it all, the rebellious attitude and the way these acts were not going to be silent about issues they cared about.

It was apparent however, that bands with this drive and desire for change were becoming less and less common as the years passed. Granted artists such as Rage Against the Machine and the Refused bucked that trend but as the mid 2000's arrived, it was a little too quiet on the western front. That was until Orchestra of Wolves. Gallows are a hardcore punk band. Originally from Watford they formed in 2005 and by 2006 had their first album out. Entitled Orchestra of Wolves it was 50 minutes of anger, passion and rebellion. Their live shows became a thing of legend, lead singer Frank Carter was the personification of aggression and drove audiences into a frenzy with his brand of devastating vocals and unrelenting stage performance.

This was very much Gallows in its alpha stage. The band have said OOW was made out of necessity, with little thought into its overarching message. This was an album made up of individual tracks, there is no cohesion, that is except through raw power. The album caused shockwaves through the musical landscape. The rock world, now over populated with pop punk bands indistinguishable from each other, was impressed and they weren't the only ones.

In 2008 Gallows were signed to Warner in a deal estimated to be worth in the region of $1 million. A departure from their punk sensibilities? Not according to the Stu from the band...

"Everyone’s worried that when you sign to a major label that you’re going to change your sound in order to sell more records", he told The Quietus back in 2009. "But they signed Gallows and they’ve got a 101 other bands on the roster that fill every other niche that they want to market to".

"They don’t want us to sound like Green Day because they’ve already got Green Day. They signed Gallows because they want to put out our music. So while I can understand why people would be concerned about us getting into bed with them people need to remember that we’ve got full control over everything that we do and they do support that. "

"Yeah, we might get dropped quicker than a hot brick if we don’t sell any records but with the internet and the industry the way it is a the moment, we’ve had two years on the back of this corporate machine building up our profile, if they want to let us go then we’ve still got that profile, we can do what we want. We can’t really lose." 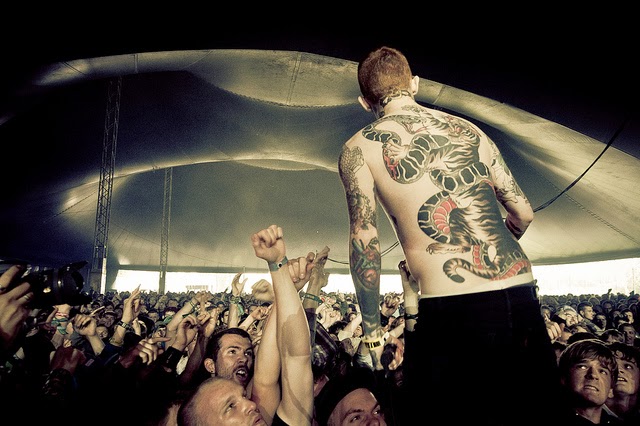 The band had the means to produce the record they always wanted to, and that's exactly what they did. Armed with a 33 piece orchestra, the famed producer Garth Richardson and the time and space to create something truly special. Grey Britain was born. So why Grey Britain?


"The black, white and grey idea came from a short film I wanted to make which would literally show the colour draining out of the Union Jack" Frank Carter told The Quietus. "The flag is three colours that represent three countries and how proud we are to call ourselves Great Britain but how many people actually feel like that? The Scottish don’t want to be part of it, the Welsh don’t, the English don’t. You take the national colours away and you’re left with black, grey and white."

"Very few people are proud to be British. People complain about immigrants but they come here and they work so hard. They have more British pride than the Brits. The Brits are teaching their kids ‘Don’t work like a dog. Claim the fucking dole. £44 a week? You can live off that. Free flat? Fucking sorted.’"

The concept of the album revolves around the end of 'Broken Britain', and chronicles the causes that brought down the once mighty empire. It's a powerful listen. It begins with The Riverbank, not a song in itself but an introduction of the concept and the sound of what's to come, it leads into the first full track London is the Reason. "We are the rats and we run this town".


Leeches is Carters response to organised religion and contains riffs not dis-similar to Black Sabbath. It's a damning inditement of religion lyrically "A million Hail Marys won't save you know, burning all your churches down". From religion the focus is shifted to politics with the introduction of Black Eyes.  Named not because of what you're left with after a scrap (well not just because of that anyway) but because of the black the band sees when they look into a politicians eyes.

I Dread the Night follows suit, commenting on the 9-5 "live for the weekend" culture alive on the streets of Britain today. It's one of the more "pop" moments of the record (sort of) with a melodic, singalong chorus. In fact, if it wasn't for the vicious lyrical content, it could have been a rock radio staple.

Next up is Death Voices an ode to the four horseman of the apocalypse given a 21st century spin. "Bring me famine, bring me death, bring me war and pestilence". It's the second track of the album to feature an extended string section, originally put together on garage band by guitarist Laurent Barnard, and it serves as the intro into the albums quietest moment The Vulture Act 1.

Frank Carter's first attempt at singing on record and it's an experience that would give him the confidence to stretch his vocal chords in a cleaner manner for future projects. A haunting acoustic performance which builds into The Vulture Act 2, the lead single off the album and one of the most immediate tracks in the tracklisting. "Live by the sword, die for the lord, call on the vulture, to dine on the corpse".

The Riverbed has been described as the point in the album were things start to get serious. Beginning with an air raid siren and almost two minutes of uninterrupted crushing riffs, it's the albums heaviest track and is still a live favourite today. Containing no more than a few lines of vocals, it's an opportunity for the rest of the band to show off their ability, who do so with gusto.

From the heaviest track on the album to the fastest, The Great Forgiver is a throwback to the fury and energy of the first album but with words very much in tune to the concept of Grey Britain. The track talks about heaven and the idea of murderers and rapists having their crimes forgiven just because they have asked to be saved. Frank told the NME "If Heaven is full of those people, give me Hell any day".

Graves is an album highlight and features the vocals of Biffy Clyro's Simon Neil, which, in the bands own words, "takes the track to a level we wouldn't have been able to get to on our own". The old school punk number is followed by Queensberry Rules, a song about knife crime which yearns for the days where men would settle disagreements with fists not blades.

The final two tracks of Grey Britain really are the darkest. Misery is a song which describes the lowest feelings a human being is able to feel. It's a difficult listen, an aura of hopelessness surrounds the track which ends with the sound of a pig being slaughtered, a sound that is so awful and disturbing, that it is used to "cleanse the pallet" of the listener before the big finale.

This comes in the form of Crucifucks, which revisits all the previous themes of the album. It hovers over Grey Britain and surveys what's left before it announces "Grey Britain is fucking dead, so lets cut our throats, end our lives, and lets fucking start again". An aggressive and very definitive end to what is an amazing concept album.

It's not a feel good record, and it certainly won't be one the entire family will stick on for a road trip to Hunstanton, but Grey Britain isn't trying to be that. It's a dark and at times devastating experience which enthrals the listener. Filled to the brim with great punk rock tunes, its a must for any serious rock fan.

And before you get worried that the band must be a clinically depressed bunch to create something so bleak and powerful, here's a quote from Frank to remind you when all is said and done, it's just a piece of art...

"Life is fucking amazing. We’ve always been about having a good time. We’re happy. We wanted to make an album that we’re proud of and we wanted to have a message and our message is still just writing about us and our situation, but this time we just decided to write about the bigger picture, but frankly? I’ve never been as happy in my life."
Alex