Enter Shikari: The Kings of Reading and Leeds 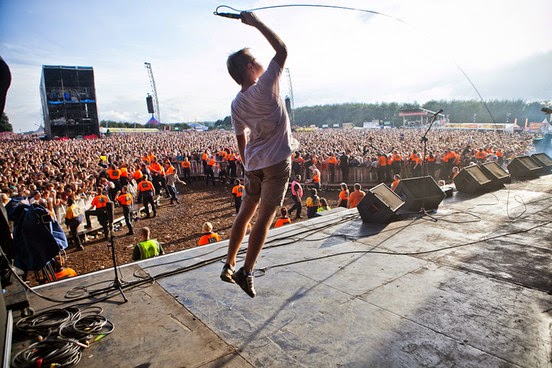 It's become a tradition. The annual descending of anarchy by hardcore revolutionaries 'Enter Shikari' onto the fields of Reading and Leeds festivals. They arrive, they wreak havoc (both A and B) and leave. For six consecutive years the lads from St Albans have been abusing music's worthless boundaries to the delight of the Reading and Leeds audience.

That's quite an achievement, and one that deserves recognition. Below I'll be running through the highlights of the last six years of performances from the dominators of Herts hardcore. Hold tight.

Fresh faced and riding the wave of success from their debut album 'Take to the Skies' Enter Shikari played the NME/Radio 1 tent to a ravenous crowd. Desperate to hear their brand of rave tinted rock that had been dominating playlists for the last 365 days, the crowd were volatile; and equipped with a mini trampoline, the band didn't disappoint. This rendition of Return to Energiser is especially rowdy.

Following the release of their second album 'Common Dreads' the band made their debut on the mainstage. This is the year when things stepped up. A capacity crowd kicked up a dust storm at an especially dry Reading festival and all hell broke loose during a mis-tuned rendition of Juggernauts. Crowd surfing is alive and well, don't believe me? Watch this.

A year on, and the band return to headline the NME/Radio 1 tent, a different beast to the one they were two years ago. The production is another level and the band are a well oiled machine. Even 'Mothership' has had a makeover, given a dubstep reworking to stunning effect.

Mainstage madness resumes. Stage antics and stage climbing is compulsory and the energy is ramped up to 11.  It was a very rainy year back in 2011 as front man Rou's coat will testify to, but that didn't stop the crowd getting stuck in. Zzzonked saw things kick into top gear. Carnage.

After releasing their critically acclaimed third album 'A Flash Flood of Colour', the band returned to the mainstage after just a years wait, bringing with them a deluge of new tunes to batter the festival goers with. Of course sometimes its the classics that get the biggest reaction and this version of 'Sorry You're Not a Winner' stole the show. Human pyramids anyone?

It's Enter Shikari, but not as we know it. Deciding to experiment with something different, the band threw themselves into full on electro taking to the stage in 2013 as Shikari Sound System. Performing remixes of their own songs as well as a deluge of crowd stompers from their favourite artists, this was a full on rave. Unfortunately it was a case of no cameras allowed, but you can have a glimpse of what the experience was like in the videos below.

And so we come to this year and the band are back to performing with their beloved instruments. New versions, new songs and no Juggernauts! This was a new look Enter Shikari, ready to build on their already impressive Reading and Leeds legacy. From the opening synths of 'Solidarity' to the final chorus of 'Sssnakepit' it's an intense 45 minutes. I couldn't choose just one track, so enjoy the whole lot! \m/