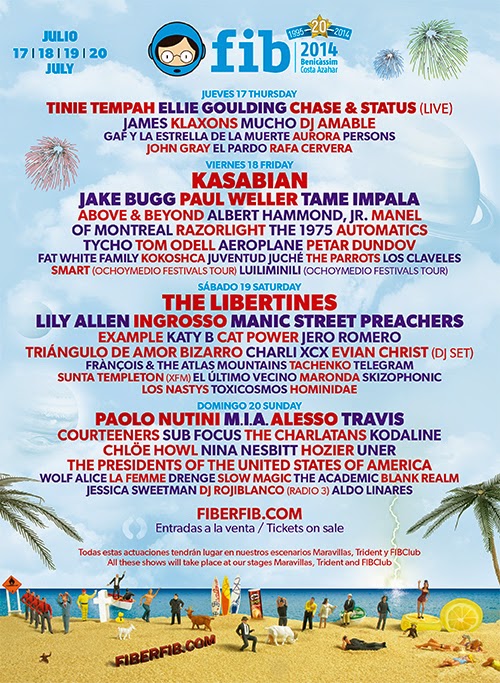 Sun, sea and sound. Plus plenty of sangria. Benicassim festival is approaching and will be bringing with it a host of top bands and glorious sunshine for this years revellers. Taking place from Thursday July 17 to Sunday July 21, this years line up consists of Glastonbury headliners Kasabian, rap superstar Tinie Tempah and indie rock legends The Libertines.

Situated in the Costa Azhar in Spain, Benicassim has the luxury of beautiful weather, which can provide a welcome respite to the myriad of clouds, rain and general gloom over here in the UK. After the torrential downpour that occurred during Thursday and Friday over at Glastonbury, this a fact that can't be stressed enough! Imagine all the joys of the English festival experience, but without running the risk of getting hypothermia and pneumonia by standing in the freezing rain all day.

Enough Met Office predictions, lets get into the music. In case you aren't aware, one of the greatest British bands formed in the last fifteen years have reunited and are headlining the festival Saturday. Pete Doherty and Carl Barat will be on the same stage again as part of The Libertines, performing some of their greatest tracks including Up the Bracket, Don't Look Back Into the Sun and Time for Heroes. Anything could happen when they get on stage. Expect the unexpected.

Kasabian have just released their latest album which shot straight to number one and provided the backdrop to their incredible Glastonbury performance. Now that they're all warmed up and playing better than they ever have before, its the perfect time to catch them live, and they'll be headlining the festival Friday. Expect to see new bangers Bumblebeee, Stevie and Eez-eh as well as classics Club Foot, Days are Forgotten and L.S.F.

Those two acts are not to be missed, but there is plenty more emerging talent to keep an eye out on across the site. The new punk frenzy of Fat White Family, the power pop tones of The 1975 and the electronic vibes of Charlie XCX are all playing and are certain to amaze. The modfather Paul Weller is also playing, along with his protege Jake Bugg. Oh and if you don't catch the Manic Street Preachers, you're missing out big time.

4 days of music, 8 days of camping. If you need a holiday and love music, this might just be the ideal destination. For more information on the lineup and information on tickets visit www.fiberfib.com.