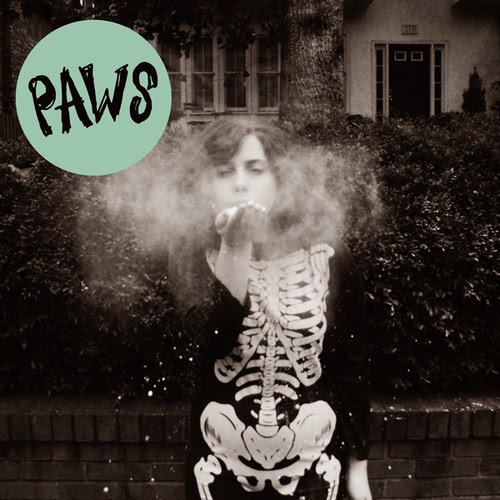 Spats with Morrissey aren't exactly common but when the news broke that the singer had become embroiled in an altercation with yet another band it wasn’t earth shattering news. The band responsible for upsetting him this time were PAWS, a rock band from Scotland who were in the middle of a tour across North America supporting We Are Scientists. After a few verbal exchanges both parties went their separate ways. Morrissey went off delighting audiences with his trademark whimsy and PAWS continued across America with their raucous rock n roll circus, a circus which has an album of new songs to delight audiences with.

Youth Culture Forever is the second album from the three piece and is the follow up to CokeFloat!, which delighted fans and critics alike back in 2012. So what can we expect from their sophomore effort? Erreur Humaine starts by throwing together the two opposing sides of the band’s sound, the subtle and the…not so subtle, the former playing a much larger role this album around.


Owl Talons Clenching My Heart is the lead single from the album and has a distinct flavour of The Vaccines about it. It’s the lyrical content of this track which really hits home however “Owls talons clench at my heart, me and you so young God knows, I'm with you”. Despite the bands rock sensibilities they’ve always had an ear for a pop hook, Give Up and Lets All Let Go are indie disco staples in the making, both possessing melodies that will be hovering around your head for days.

There’s still a DIY edge to the sound the band put to record, there is no shine or polish to be found on any of the tracks here and almost a grunge sensibility to the tones showcased. This is where the softest moments on the record could be built upon. Alone and YSF sound like they’ve been recorded in an empty bar, the result is an effective yet wasteful one which leaves the pair sounding like bootleg versions, leaving you yearning for carefully crafted studio cuts.

The album is a solid listen so far but really gets going when we delve into it’s full on grunge moments. The instrumental Great Bear and the outstanding War Cry feel like something straight out of Nirvana’s In Utero and rock to a level their contemporaries can only dream of, the latter sounding like Scotland’s answer to Scentless Apprentice.

All in all Youth Culture Forever gives us a bit of everything and expands PAWS pallet further than perhaps previously thought possible. Whereas Cokefloat! gave them a solid pop rock foundation to build on, PAWS have taken several strides forward and explored exciting new terrotries, the result of which is bound to win them new fans. Are they charming men? If you ask Morrissey, perhaps not, but PAWS are a band not to miss out on. If only I had a stitch to wear.
Alex