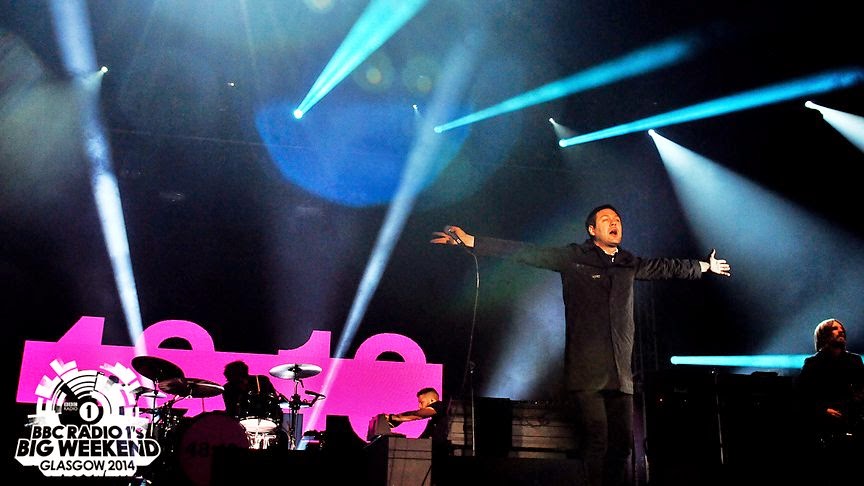 BBC Radio 1 hosted its annual Big Weekend in Glasgow last weekend bringing a star studded line up to Scotland which included Coldplay, Pharrell Williams and Kings of Leon. As well as these heavyweights the line up also featured Britain's biggest rock band, Kasabian, who closed the "In New Music We Trust Stage" on the Sunday and proved to everyone in attendance exactly why they are the best in the business. Let's not get into why the Leicester rockers were demoted to second stage duties (Katy Perry was the official headliner) let's get into why Kasabian were the highlight of the weekend.

Boasting a ridiculous set list, with top 40 hits littered all over the place, the band raced through their set which lasted just over an hour. Club Foot was vicious, Shoot the Runner (accompanied with Kanye West's Black Skinhead as an intro) was furious and new track Bumblebee was unrelenting. For a band with roots in pop music this was a set not for the faint hearted.

It was not just the pace which impressed, the band were a solid cohesive unit of noise, sounding less like a group of musicians and more like one sentient being. They had pretty hefty competition for the title of performance of the weekend but even the excitement and riff filled stylings of Royal Blood couldn't take it away from them. Pure power fuelled Kasabian's performance and pure power is what the band will bring to Worthy farm when they headline Glastonbury this summer.

It has to be said when the band were first announced as headliners there was a sense of muted celebration from the music community. This is not out of lack of affection or lack of respect for what the band do, but more out of familiarity. Glastonbury always has a wild card headliner and that's the one which fuels the media attention for the weekend. Kasabian were most certainly not that this year.

Although they might not be the most out there choice, they are guaranteed to steal the show at this years festival through sheer rock n roll hysteria. The bass-tastic Vlad the Impaler, the singalong inducing Fire and the old favourite LSF all but guarantee a famous set awaits us, but its the new album which might pip Metallica past the post.

The aforementioned Bumblebee and lead single Eez-eh have not just been well received, but have been taken to like a duck to water. If these are anything to go by, we might just have an album of the year on our hands.

So prepare Glastonbury, for you know not what approaches. Whilst all the talk has been of the Metal legends Metallica descending upon your fields, it is the boys from Leicester who should be most anticipated. Unfortunately this year I opted for sunnier shores and will be travelling to Benicassim. Wait! They're playing there as well? Eez-eh.
Alex