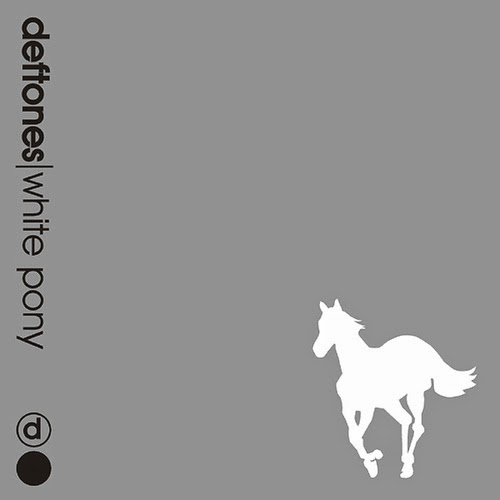 Sacramento's finest, on top of their game and as experimental as ever. Back in 2000 with the release of their third album White Pony, Deftones changed the face of the alternative landscape and well and truly abandoned their nu-metal image that they had been unceremoniously and unfairly stuck with.

Adrenaline and Around the Fur established Deftones as rock heavyweights and proved they were capable of keeping up with the best in terms of aggression, but White Pony introduced something different, something softer. Chino Moreno talked about this in an interview with Alternative Press...

'I’ve always been influenced by things like Morrissey, things I grew up with. I’ve always been inspired by softer stuff, I guess you could say. I feel like I've always tried to put it into our music. With White Pony, I felt a little more liberated. I was able to try more things and not be ashamed. '

'For instance, Teenager, which is the probably the lightest. song on the record. It’s pretty much all instrumental and all electronic. The beat is programmed, the only thing that’s real on there—or that’s played—was Stephen’s high keyboards. It’s one of those things that builds, and it sounded like nothing else and no one really had a problem with it. I brought it to the band and was like, “What do you think about putting it on the record?” [The band] were like, “I like it, it’s a great song.” To me it felt like the record was already venturing out into other places, so it didn't feel like this was going to stick out like a sore thumb. I just thought it would add more colors to the palette, and it feels like that’s what it did.'


From the opening seconds of Feiticeira, the listener is immersed into a sound that is ever present through the record. A stronger sense of atmosphere, a much more prominent role for Chino's clean vocals and a noticeable electronic element all make White Pony a different entity to their previous two efforts.

Its also striking how unique the bands sound is on this album, there is no other band around you can mistake for Deftones on White Pony. Their mix of harsh metal riffs and ambient electro textures is something that shouldn't work, but does.

Lyrically, White Pony follows a familiar theme, with cryptic metaphors and tales of past experiences creating poetry. Street Carp is an off kilter constantly changing example whilst Digital Baths' sinister story (electrocuting a girl in a bath) is striking. So what spurred these interesting themes?

'Drugs. [Laughs.] Pretty much. That was a time, if I have to be honest, when, as a band, we started to experiment a little bit more with drugs. I’m not going to attribute it all to that, but I’m sure it had something to do with it. I was kind of out there in my thoughts and thinking of things. Sex and violence are a big part of fucking rock ’n’ roll, always have been. Plus, one of the most interesting aspects of rock to me, so bringing that in and being sort of cryptic and still not being so blatant about it.'


It's also an album which was released without its biggest single inside, Back to School was a reworking of Pink Maggit the final song on the album and was added later on a re-issued version of the album, in a move that has been widely criticised by the band.

'Back to School' was a mistake. A calculated song, that had been built up with only one aim in mind: It should be a single. ... 'Back to School' was released because I was an idiot. I wanted to prove something [to the record company]. Months later, after White Pony was released, they wanted us to do a new version of "Pink Maggit". They said we lost our heaviness, and there were no more singles on the album. First, I wanted to stick this idea up my ass, but then I thought: 'I'm gonna show those fuckers how easy it is to create a hit-single.' And so I rapped a hip hop part on that song, we shortened it and half an hour later, the hit-single was ready to roll on.'

Drugs, a radical new direction and a song which spawned a fall out with their record label. Thats rock n' roll. This is the sound of a band at the height of their powers, throwing caution to the wind and embracing any and every idea that came their way. Shunning the traditional metal trajectory and distancing themselves from the scene they were associated with White Pony is a statement. A statement of intent from a band who have continued to amaze and inspire ever since.