Punk Is Not Dead 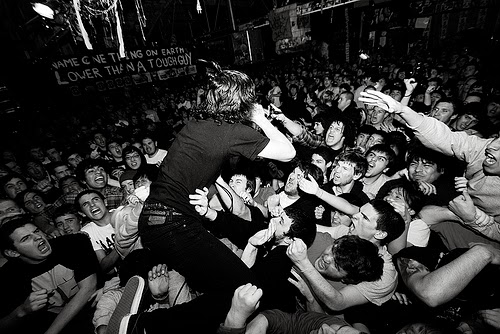 Bankers are running riot, the housing bubble is ballooning again and Russia are doing whatever they like. There's a lot to shake your head at on the news these days, in fact if you tune into any 24 hour news channel you'll find yourself going from zero to angry in record time. Living in the 21st century is proving to be more complicated than first thought.

Of course the world has always been a bit mad and things ain't about to get any easier. What we need is a coping mechanism. An outlet to express our frustration and emotion at the injustice and criminality running rampant in our world today. Though our radios may be littered with bland, middle of the road nonsense, there are still those who are willing to shake things up a bit. Punk is still alive and well in 2014.

On the evening of another budget, when politicians have been arguing and bickering between themselves about fiscal responsibilities and tax breaks, its about time we had a bit of chaos. Here are a selection of bands who aren't happy with just treading water. Whether it be speakers, boundaries or noses, these acts break just about everything.


NSFW. A band whose live shows have become the stuff of legend. Fast, uncompromising and brutal. Not for the faint of heart.

A throw back to the classic US punk sound of a few decades ago. Skate and destroy music.

New line-up, same intensity. Whether listening to Orchestra of Wolves and Grey Britain with Frank Carter's frenzied screams or the self titled third effort with Wade's wall of noise, you're in for a treat.

One of the most hardworking acts out there today. Choruses galore and a frontman with a voice as distinctive as they come. Drift into a more metal sound at times, but the attitude is all punk.

Breaking down boundaries, the new album brings transgender dysphoria to the masses. As punk as it gets.

Worth a mention for this cover alone. Loud, brash and so very British.

I could go on. Check out Venn records for some great upcoming bands and visit your local venue. Gigs make the music world go round.
Alex