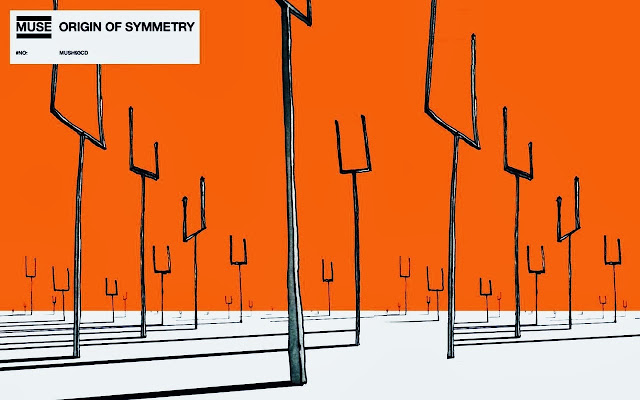 "Everyone’s been writing about the origin of life so now they’ll start looking at the origin of symmetry; there’s a certain amount of stability in the universe and to find out where it originates from would be to find out if God exists."


The words of Muse frontman Matt Bellamy who in 2001, along with drummer Dominic Howard and bassist Chris Wolstenholme, released their second studio album entitled 'Origin of Symmetry'.

"The name of the album, 'Origin Of Symmetry', is from a book about geometry of the universe and how it's all in beautiful balance, a perfect thing in ten dimensions. It explains all the mysterious forces we invented religions around."

So thats the title explained. It doesn't get any less confusing from here on in. Following the release of their first album 'Showbiz', Muse had largely been written off as a Radiohead tribute band. With the world still rocking from the release of 'OK Computer', the debut release just wasn't enough of a statement to shake off the shackles of that comparison. OOS on the other hand, was.

With the drama and sense of theatre notched up to 10 and with the installation of heavier riffs and classical piano this was a statement. So much of a statement in fact it was not released in America because of a disagreement between the band and their record label on the albums direction after it was deemed 'not radio friendly'.


This is Muse's 'mad scientist' album, with seemingly every idea thought up of in the studio finding a place on the final version. Animal bones used for percussion ('Screenager'), a Nina Simone cover ('Feeling Good') and a full on operatic rock blast ('Microcuts') are all accounted for along with a cavalcade of riches including the stadium set staple 'Plug in Baby'. Perhaps the piece de resistance on this album though, is the seven minute epic 'Citizen Erased' which combines all aspects of the album into one glorious muddle.

The album also wears its influences on its sleeve. Classical artist Rachmaninov is borrowed from on 'Space Dementia', Rage Against the Machine's 'Snake Charmer' is all too recognisable on the magnificent 'Hyper Music' and an old SNES game is cited as the influence for the synthesizer led 'Bliss'.

All these components make for a quite frankly bewildering album. There is no concept and there are certainly no boundaries present, just three musicians pushing their musical abilities and imagination to their limits.

This album is far from perfect however. 'Darkshines' is some what of a black sheep, 'Screenager' stumbles to its conclusion suffering some what of an identity crisis during its run time and 'Megalomania' attempts the grandiose stadium spectacle perfected on later efforts. That's not to say these are bad tracks, their imperfections give a sense of identity and edge to proceedings. The fact they are so unpolished installs a sense of 'what the hell is coming next' into the listener. U2 this ain't.