The Genius of Omar Rodriguez-Lopez 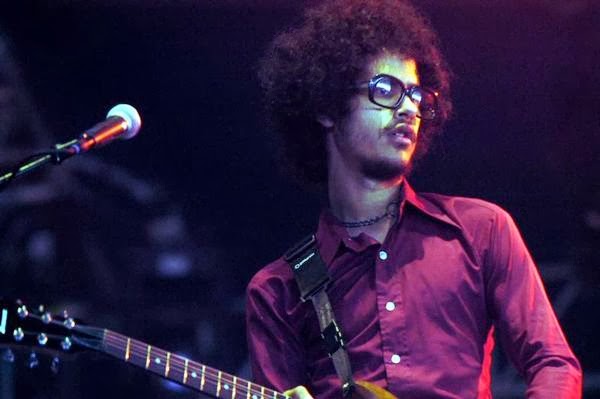 Uncompromising, confrontational and always challenging. Very few musicians in this era can claim to have the same level of creative drive and imagination of that of guitarist, song-writer and producer Omar Rodriguez-Lopez.

A founding member of At The Drive-In, The Mars Volta, (surprisingly) The Omar Rodriguez-Lopez Quintet and Bosnian Rainbows, he is one of the hardest working musicians around releasing records, collaborating with other artists and performing live at a pace that is quite frankly staggering.

Perhaps best known for his work with Cedric Bixler-Zavala, he has recently announced his newest musical venture 'Kimono Kult' which will also feature former Red Hot Chilli Pepper John Frusciante. They will be releasing their first E.P 'Hiding in the Light' via Neurotic Yell Records which has been described as “four songs of electro/dub/afro-beat/avant-freak/jazz-like conversations of instrumental ecstasy.” So business as usual.

The only song currently available to listen to from the EP is entitled 'Todo Menos El Dolor' and on first listen sounds like the musical equivalent of a rubix cube. From the progressive rock stylings of The Mars Volta, this new venture takes things one step further.

Taking things a step further seems to be the theme of his career to date. At The Drive-In were a volatile aggressive rock outfit and despite being one of the most exciting acts around, their punk rock stylings appeared to inhibit and limit the creative output of Rodriguez-Lopez. Thus The Mars Volta were born. A prog rock crescendo of whirring song structures and complex musicianship. From the relatively accessible De-loused in the Comatorium' to the inspired yet almost impenetrable 'Noctourniquet' TMV pushed the boundaries even further after every release.

So what fuels this relentless boundary pushing mentality? In an interview with Rolling Stone, Rodriguez-Lopez spoke about how he was able to walk away from established projects and try something different...

"I’m most interested in living life. There is this hyper-awareness of success by numbers – the biggest fan base, the most tweeters or Facebooks. If you don’t equate high numbers with success, then it’s a whole different ballgame. And it’s good to have perspective. Look at what happened with At the Drive-In: having the time away from each other gave us immense perspective and understanding."

"You have to venture out and experiment. If you look at Mars Volta, with the long songs and elaborate arrangements, it would seem only natural in that context that it would be exciting to do something completely stripped down, short and to the point."

And strip things down is exactly what be did with 'Bosnian Rainbows'.

A more relaxed affair Bosnian Rainbows were formed in 2012 and have so far released one self titled album. Regarding the bands inception, Rodriguez-Lopez cited being off tour as the perfect opportunity to start something new...

"I found myself lonely and bored. So it's like, 'OK, new phase — let's get into it and let's create a dialogue. Let's find some things out."

So having released over 15 albums through his various projects since 2010 (!?) does the creative force have anytime to himself? In fact he does! When he's not producing mind bending experimental rock he's indulging in his other passion, filmmaking.

Having produced every TMV music video and various others for his other projects he believes there is an affinity between music and cinema.

"It’s that same spirit again – cinema is literally something you cannot do on your own. You can get greedy with music, and we’re living in the time of people making records in the bedroom and on laptops. But you can’t do it with cinema. You have to collaborate. You need various people and locations and weather. It’s awesome."

So here's to you Omar. Having created some of the greatest alternative albums of all time and some of the most mindbending art of the 21st century he is still going strong creatively with no end in sight in terms of his ambition. Who knows what 2014 will bring.

Kimono Kult will release their E.P Hiding in the light on Tuesday March 4.
Alex