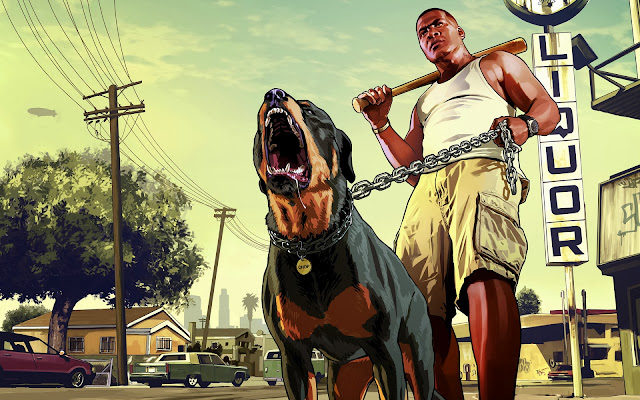 GTA V's gangster from the projects Franklin Clinton reveals his softer side in this exclusive extract lifted from his personal diary.

I need to move out. For the umpteenth time since writing this damn diary I have found myself at loggerheads with auntie. All I want is my own space! Is that too much to ask!? The latest argument started after Lemar decided he was going to leave Chop (his delightful rottweiler) with us for a few days to which I agreed. It was not five minutes after I told auntie of this arrangement before she was screaming the house down and telling me how her 'gentleman callers' might be frightened off by the 'big bad dog'. Anyway I couldn't be bothered to argue with her so I stormed out and took a ride on my new bike that Simeon got me for a 'leaving present'.

Now before I continue, I have to stress the following events may paint me in a bad light...but trust me when I say that everyone else is to blame. Not me. Okay so I'm riding my bike down near the local Ammunation when I hear a woman shouting for assistance! She had just been robbed and I could just about make out the felon running away into the distance!

I quickly threw caution to the wind and (with no care for my own safety) accelerated after him, he was on foot so I caught up with him quick sharp! My plan was to park in front of the criminal and order him to halt, he would then hand over the purse and transport himself to the authorities. I would be the hero and order would be restored. The plan was foolproof.

Unfortunately I misjudged the speed at which I had set off towards the villain (I'm still getting to grips with my new bike) and the surprising influx of forward momentum subsequently caused me to in fact ram the criminal of his feet and unceremoniously ride over his torso.

Understandably, the whole incident had worked me up into a bit of state. After a few minutes reflection on what just happened I was able to dismount from my bike and check on the injured mugger. Thankfully he was breathing and his injuries seemed to be mainly superficial, although his arm was at a fascinating angle.

After giving him a few dollars for his trouble, I quickly hopped back onto my bike (with the retrieved purse) and set off to complete my good deed. Unfortunately (which is becoming an increasingly used word in these extracts) my bikes power once again took me by surprise and I careered, somewhat embarrassingly, into the distressed woman. Thankfully there was some shrubbery behind where she was standing, which broke her fall and saved me from having to apologise to my second unconscious person of the day. Despite handing her purse back, she was still awful sore about the whole collision thing, which I did explain was an accident, and began striking me on the head! That's 21st century society for you.

Anyway after all that excitement I decided I needed a lie down and headed home. I arrived to find auntie smoking my medicinal marijuana (pain relief for my trick hip) and Chop on the dining room table helping himself to my dinner which I had been looking forward to.

I need to move out.