We Are Fiction - Interview 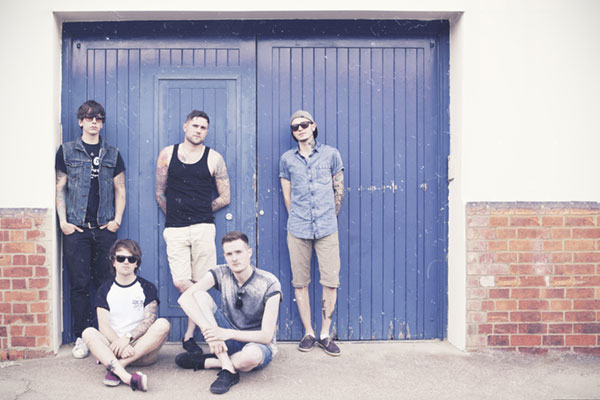 With the arrival of new single The Worst Of It along with new album One For Sorrow set for release in September and having been confirmed to play at the prestigious Reading and Leeds festivals this month,  ESP’s Alex Jones thinks We Are Fiction could be set to become the UK’s next rock super power…
‘There is no substitute for hard work ’- Thomas Edison. Wise words from a wise man and listened to by wise people. So using this logic we can ascertain that the lads from We Are Fiction (WAF) are indeed wise. The five piece alternative outfit has been tirelessly touring the country since their conception in 2010, so when we caught up with guitarist Andi Scott Shaw it was of no surprise to us to discover that the band were already starting work on a new project.
Andi told me – “We’re currently planning our new video for the next single, so we need to get in touch with the label and see what budget we have for it etc.”
There really is no down time. Highlighted by BBC Radio 1 as one of the upcoming acts of 2013, the last six months have been intense. But with a passionate fan base to please and ever growing venues to fill, things are only just getting started. In fact, if the success of fellow rockers Mallory Knox and Don Broco are anything to go by, things could go supernova for the quintet.
So how does it feel to know that the band’s contemporaries are not only being acknowledged, but embraced by so many major media outlets?
“It’s massively inspiring to see those bands doing so well,” says Andi. “It makes us want to push our dream harder, knowing that we can grab the attention of the mainstream without compromising what we do.”
This seems to be the general ethos of the band. In terms of their sound, compromise is not an option, when planning the video for current single The Worst Of It, Andi told me the brief was clear.
“We wanted a simple video because the message is so strong. If we had maybe a narrative running through it I don’t think it would’ve had the same impact. So we let the music do the talking and just had a laugh in front of a camera.”
Available to watch on Youtube, the video provides a taster of what WAF are like in a live environment, which is where they truly come into their own. In fact it’s this reputation of being such a great live act that made them the first band in 14 years to sell out Peterborough’s Met Lounge with pre-sales alone!
“That show was intense,” says Andi. “We always get a good reaction at our gigs especially in Peterborough and it was our first sell out pre-sale as well so yeah, it was a great moment. The music scene here is really growing with great bands like All in Colours and A Story to Tell ones to watch.”
As if the music and the live performances weren’t enough to get this band noticed, Andi told me they’ve had a little help from a friend of theirs who’s been spreading the word to a whole new audience.
“Aston (JLS) has been a friend of ours for years! He’s the cousin of our bassist Ryan and he’s been into our music from the beginning. When he mentions us on Twitter or something it’s amazing the amount of kids who are into pop give us a listen and really enjoy it.”
So with the JLS star finding himself with a bit more free time soon, have WAF bagged themselves a new vocalist?
Andi – “Ha ha! No nothing’s been discussed yet but who knows! A collaboration in the future could be interesting…”
A collaboration would truly throw the rule book out the window. But then again who cares what the rule book says. ‘Hell, there are no rules here – we’re trying to accomplish something‘ – Thomas Edison.
We Are Fiction’s single The Worst Of It is available to buy now on iTunes and tickets for Leeds Festival are still available at www.festivalrepublic.com.
Alex Jones
Photo:  Tom Calton Photography (http://www.tomcalton.co.uk)
*originally published in ESP Magazine http://www.espmag.co.uk/we-are-fiction-interview/