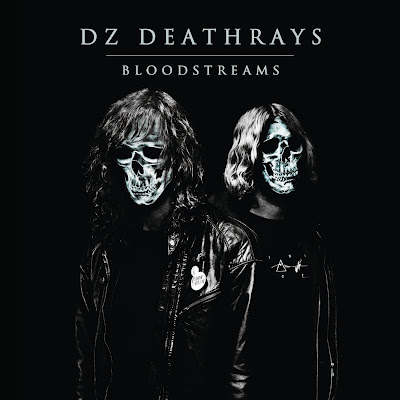 Two piece bands are brave. There’s no chance the lead guitar mistakes will be masked amongst the noise, no hiding at the back whilst others front and assert their stage presence and you better have an athletic road crew if you hope to start a 5-aside football team. Nope. If you decide to be a two piece it’s quite the responsibility.

But three’s a crowd right? Additional members are just padding right? And as for Slipknots army of members?? Don’t get me started! In fact after listening to the almighty racket that DZ Deathrays debut album “Bloodstreams” packs, you might be convinced that the two piece approach is the future! As soon as “Teenage Kickstarts”…kickstarts all pre-conceptions and concerns about the number of band members (or lack of) are gone. Because you realise that this record is going to be fun.
With fuzzy bass line-esque riffs aplenty, the tracks on this album are full to the brim with sex, drugs and rock ‘n roll, with thrash pop track “No Sleep” telling us bedtimes are for the elderly “No Sleep till you pass out, you’ve got too” and standout song “Gebbie Street” gifting us a chat up line to try on our next boozy night out “Your eyes like diamonds sparkle gold, you know our bodies make the right conversation”.

Elsewhere on the album, new single “Dollar Chills” starts off with a whirring effect driven riff which transforms into a stomping grunge bass line for the verse. Although a single it feels like a warm up for the next track “Debt Death” which is a barrage of fast paced shredding, explosive drums and vicious vocals. A priceless combination executed to perfection, two minutes and eleven seconds of head banging goodness.

With all well balanced records, Bloodstreams has its slower moments with the gain pedal given a much needed rest on “Dumb it Down”, replaced instead with a jittery delay effect giving the song an almost sinister feel accompanying lyrics detailing a story of regret and rejection “I was a fool l who came to fool around”. 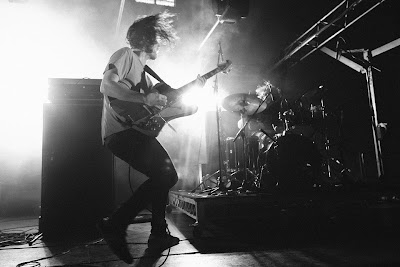 Stick this album on at any house party and it will feel right at home. An in your face record which will get you jumping up and down from track one. So along with Death From Above 1979, Lightning Bolt and Blood Red Shoes, be prepared to add DZ Deathrays to the list of your favourite two piece rockers. They've earned it.