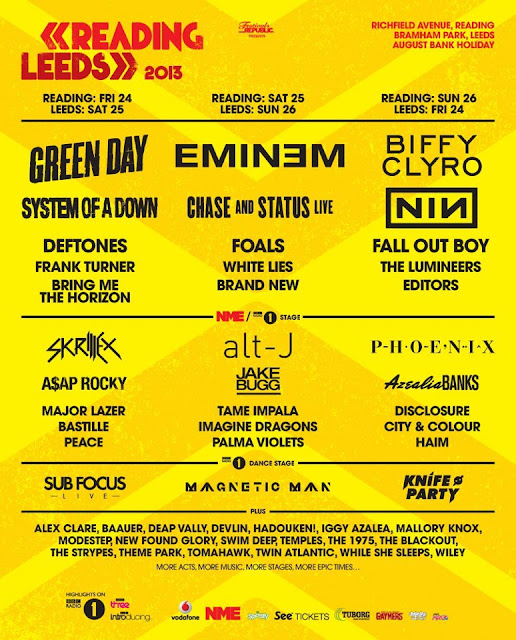 Reading & Leeds. A festival which has a slight schizophrenic nature in terms of musical preference. I like to think of it as the festival where hipsters come to die, sure they arrive in their fake glasses and boat shoes looking forward to watching "Haim" or "Bastille" but halfway through the festival they experience something. It happens when they least expect it, perhaps whilst browsing the stages they come across a guilty pleasure, "Fall Out Boy" for example and decide to ironically watch and share a few laughs with their crew. Then suddenly, during the performance of "Sugar We're Going Down" it hits them. This is the most fun they've had all weekend.

The main stage crowd are throwing their hands in the air like they just don't care and they can feel themselves doing the same!! The band leave the stage and the hipsters walk away bleary eyed and confused, emerging after the set with an enlightened view on the world of music and festivals. Their hipster attitudes diminished they decide that raving it up with "Knife Party" might be more fun than popping to the "Festival Republic Stage" for some unsigned indie-folk.

This years line up has the usual mix of old favourites and up and comers which should please both festival veterans and first timers. The rise and rise of "Dubstep" is documented with "Skrillex" headlining the "NME/Radio1 Stage" with Mercury prize winners "alt-j" and French rockers "Phoenix"  taking up the other two slots. The main stage is pretty dang impressive. "Green Day" who pretty much stole the show last year (as well as being the worst kept secret band ever to perform at the festival) return to their rightful spot on top of the poster. If its anything like last years performance the fans are in for a treat.

Eminem is the second headliner for the festival and probably the most exciting/controversial, mainly down to the unpredictability of what his performance might consist of. Personally a strong showing of early material with lashings of Recovery would be ideal, but that's just me. As far as how the crowd will receive a rap headliner...well it could swing either way. On one hand Jay - Z was a resounding success when he headlined Glastonbury a few years back not to mention the fact that Eminem has festival experience, not only with this very festival which he headlined back in 2001, but much more recently with a headline slot at T in the Park (even if it is a slightly more "mainstream" festival). However Reading and Leeds fans are renowned for not shying away from voicing their displeasure at an artist who doesn't perform up to standards, and if slim shady comes out with a pop/R&B heavy set...well he could befall the same fate that his mate "50 cent" and his crew fell to at the festival not so long ago.

* The following video is not pretty. If you believe throwing bottles at performers just aiming to please is wrong then do not watch... it is a bit funny though.


Biffy Clyro are the final headliners on the mainstage but I've written about them recently so I won't go on. However you can read that article HERE. Also just to remind you how good they are live...

This year also signals the introduction of BRAND NEW STAGES to the festival sites! The Lock-Up stage/Dance stage will be for the first time separate entities! As of yet the Lock-Up acts have not been announced, but Sub Focus, Magnetic Man and Knife Party will be leading the brand new dance stage into battle. This year will also be the debut of the "1Xtra stage" which will be featuring Devlin and Wiley which points towards a grime/UK rap vibe for that stage. Just another musical dish now available at the festival.

So. From the information currently available it's clear that this years event could very well be the finest weekend the organisers have ever managed before! Strong headliners and a cavalcade of quality bands from every genre of the musical spectrum, everything that makes the festival so great but this time on a bigger scale! I mean I haven't even mentioned the fact that Nine Inch Nails and System of a Down are going to be there! Bands whom have very strong cases to be considered headliners themselves and could very well steal the show. So lets finish with performances from both these rock goliaths at the festival in previous years. Roll on bank holiday August weekend!