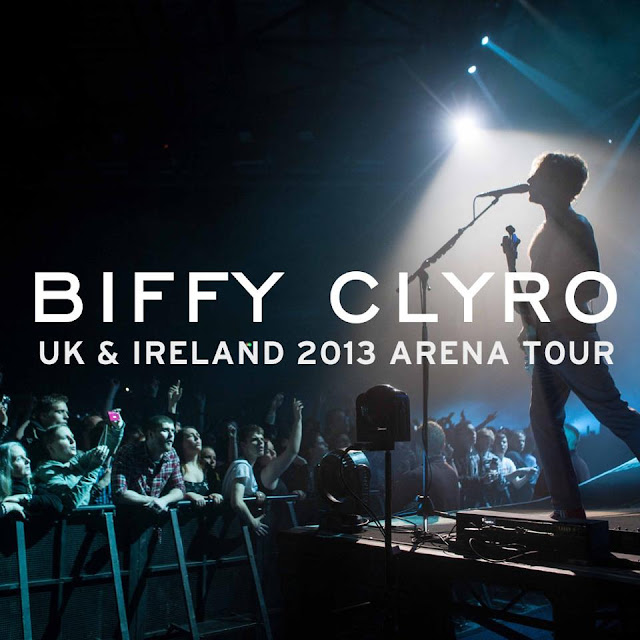 Its already been a hell of a year for Biffy Clyro. Their sixth studio album "Opposites" scored them their first UK number one album and a few weeks later they scooped up the title of "Best British Band" at the NME awards! Now all that's left for them to do is to please the thousands upon thousands of fans who have bought tickets to see them perform when they embark on their biggest arena tour to date. No pressure then.

As daunting as the task is in front of them, there is no doubt that Biffy have the tools to own every single venue on that schedule. They have hits in the bank, Puzzle and Only Revolutions contained a splattering of arena sized tracks designed to delight audiences of this magnitude, however Opposites is a game changer. Those unsure of this fact are converted within the first few minutes of the show. Minutes in which Simon Neil strides onto the stage playing the opening few chords of album opener "Different People"lulling the crowd into a choir like sing-along before the song kicks in with a flurry of riffs and drums. This is a band who have never flown higher. Backed up by a set resembling the tree of life circa 3000 ad, and the added backbone of an extra guitarist and piano aficionado the band storm through the first half of the set, dispensing hits such as "That Golden Rule" and "Living is a Problem" at a scarily efficient pace. These set staples are great but it's the new songs that have the biggest impact. "Sounds Like Balloons" sparks a mass "on and on" chant and "Spanish Radio" proves to be not only one of the best tracks the band have ever written but also one of the best tracks to experience in a live setting. With six albums to choose from the band are spoilt for choice as far as back catalogue material goes. To the delight of many in attendance the indie label records get a solid share of the night. "Justboy" reminds us that the anthems were there from the very start, rare live track "A Day Of..." flies the flag for Vertigo Of Bliss lovers and "There's No Such Thing As A Jaggy Snake" happily retains its crown as the most madcap song ever to be performed in a venue of this size. Never the chattiest on stage the banter is kept to a minimum as the songs just keep coming, a gargantuan TWENTY SIX songs are on the set list covering all six albums and every angle of their sound. 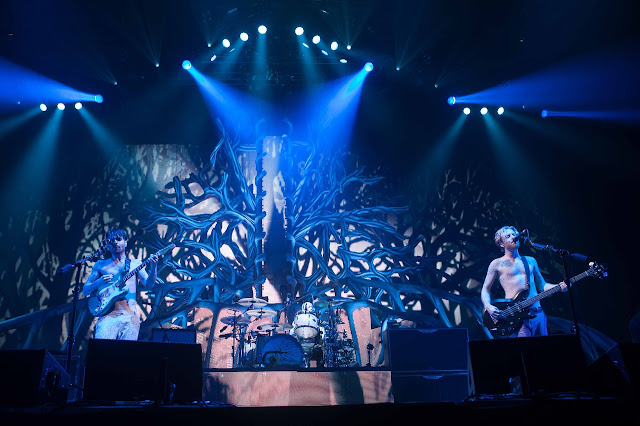 Of course a two hour show cannot consist souly of out and out rock tunes. First off that would be exhausting, second it would be a tad repetitive and third, it wouldn't encapsulate the great ballads that the band possess. A well earned rest is due around the fifteen song mark as Ben and James march of the stage leaving Simon and his acoustic guitar the task of keeping the thousands in attendance entertained. Unfazed by this undertaking the front man proceeds into "God & Satan", rejoins the band for the first undertaking of "The Thaw" before once again flying solo for "Machines". Three songs that  rest up the mosh pit and create a euphoric atmosphere around the arena, the calm before the final storm. 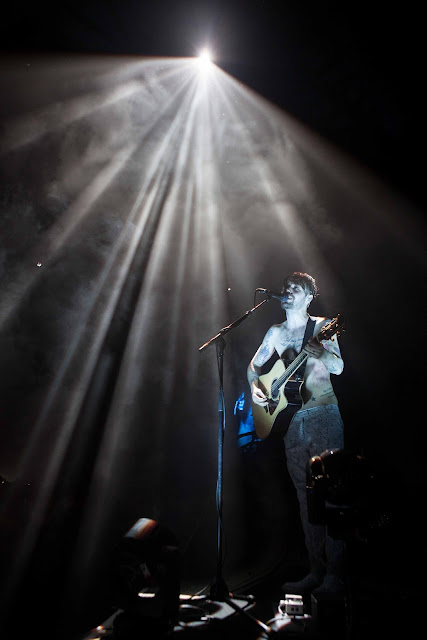 So the final third is upon us and its time to say goodbye to the main section of the night. A rousing performance of "Glitter and Trauma" kicks it off followed by "Who's Got a Match?" creating frenzied scenes across the arena. "The Captain" finally enters the set twenty one tracks in and transforms into "Picture a Knife Fight" to which the band stomp off stage, triumphant in the knowledge that they will be called back to the front line mere minutes after exiting. And indeed they do as is desired, returning with a twist. The set is transformed and Simon is placed in the middle of a makeshift Bloodstream for the performance of "Skylight"which has an added aura of greatness due to the spectacular light show. A storming rendition of "Stingin' Belle" and one last monster hit in the form of "Mountains" and its over, the first show of the tour is through and the boys have done themselves proud.

They've got a long way to go yet but judging on tonight's performance the tour can be added to their list of successes. A list that's growing by the day, so will 2013 be the year of Biffy Clyro? Almost certainly. Mon the biff.