Its that time of the year again! Its the season when the world gets all congratulatory and hands out trinkets to those whom esteemed panels and audiences have judged to be worthy of such honours. Of course the king of all award ceremonies is "The Oscars", but as my film preferences for the year were "The Dark Knight Rises" and "Ted" I am most probably under-equipped to review/satirise that particular event. However I do know a thing or two on music, so "The Brit Awards" and "NME Awards" are in the line of fire. So lets start off with The Brits...

Much has been said about this years ceremony, with the adjective "Bland" being thrown around a lot by the press and unfortunately its an adjective I'm inclined to agree with. The one overwhelming positive thing I have to say about the ceremony is that the live television production ran incredibly smoothly. Everything was on cue, there was no dead air and...yeah. A very well put together event, but an entertaining one? Not so much. To sum this point up, Taylor Swift was my second favourite thing about the event. Not meaning to be insulting to Ms Swift, but she's not my cup of tea music wise, so for her rendition of "Trouble" to be up there as one of the best moments of the night is a tad worrisome. Her performance was good though and is worth watching just for the costume change.

Apart from that and a few other lashings of quality...there was nothing to report. Robbie Williams struggled to hold a note and was visibly bored of the spectacle (he's also released a new song slamming the event), One Direction ran around after having too much lemonade and Emile Sande once again performed in front of the nation just in case you missed her at the opening ceremony...and the closing ceremony or on The Jonathan Ross show or The Graham Norton show or on every other television show requiring a musical guest. I won't even go into the winners and their speeches which ranged from the modest and the annoyingly modest. I'm being harsh, the show was OK! And you cant expect much more from ITV who were just happy to have large audience figures back after the departure of The X Factor.

Next on the agenda, and the rock and rollers got their chance to be honoured at the "NME Awards". 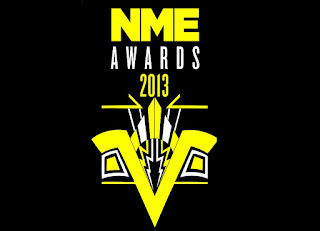 This years awards were pretty poorly publicised in my opinion, unless your an avid buyer of the magazine or a constant visitor to the website of course. Whether this was an intentional move or not, the lack of mainstream attention gave the ceremony an underground feel that if anything enhanced the event. Straight off the bat the awards gave music journos something to talk about when "new-mod" (im copywriting that description, it can also be spelled "nu-mod") Jake Bugg arrived on the red carpet and slammed The Brits, the scamp! The performances during these awards however would prove to please Mr Bugg a lot more, with heroes Paul Weller and Miles Kane performing and Johnny Marr and Ronnie Wood pairing up for a once in a lifetime rendition of The Smiths classic "How Soon is Now?".

Mr Marr was also honoured with the slightly blasphemus "Godlike Genius Award". The winners speeches were a lot more aggressive with the standard inclusion of naughty words (its not  big and its not clever guys) and Biffy Clyro were rightfully crowned the best band in Britain, Hurrah! The awards are televised on channel 4 at 9:25am on Saturday the 3rd of March, so The Brits win the television slot battle with their prime time ITV position. They also win the award design battle, the middle finger award thing is looking more and more like a poor marketing gimmick every year now, and although Damien Hirst's polka dot trophy didn't burst any brain cells on his behalf they still look pretty sharp. 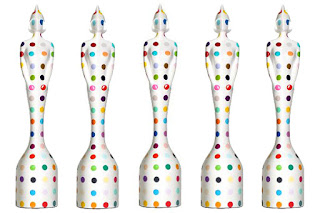 So! Overall, entertainment wise the NME awards come out on top this year with better performances, more controversial statements and a less sterile environment. The Brits win on production values and trophies, but their reputation has been damaged. No longer a place for controversial stars its the new home for family friendly musicians with their only agenda being ones their sponsors assign them. Also the Global Success Award? Oh dear. Anyway lets end on a positive note! Here's Biffy showing why they deserve their "Best British Band" award.