Before we start I'm going to direct your attention to Paul Rudd rocking the air bass.

OK! Now that very important clip has been shown we can continue with the blog. Bass is probably the most underrated yet vastly important piece of the musical puzzle. The emphasis of peoples attention usually rests on the vocalist and lead guitarists duties, whilst the bassist casually goes about his business filling out a tune with glorious rhythmic prowess. Show stealing bassists are rare and that's not a problem for most musical outfits, the bass fulfils its obligations with a graceful, somewhat humble approach compared to the grandiose exploits of the other instruments.

The most obvious exception to this rule of understated bass performers is Flea, the bassist for the Red Hot Chilli Peppers who throws down his licks with the energy of a thousand Duracell bunnies. 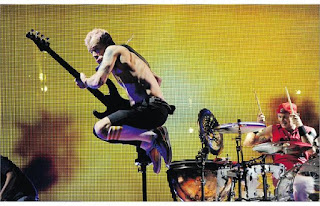 Even in this picture he's leaping through the air with the greatest of ease. I used to think Flea looked a bit rough in comparison to the rest of the chilli peppers, after all the rest of the band are very well groomed and pampered which is what one would expect of a stadium rock band. However after reading Anthony Kiedis's book "Scar Tissue" and realising just how many drugs the bassist consumed (as well as the booze and god knows what else he got up to) it's no wonder the guy looks a bit worn down. In fact its a testament to Kiedis's genes and endurance that he himself doesn't look like an irradiated disfigured zombie by now.

Suck My Kiss is a great example of the force and style that Flea can insert into a song. The powerful bass in this performance induces mass hysteria in the crowd, resulting in jumping, yelling and most probably fornicating. You can't ask for much more in terms of a crowd reaction! Although not much technical skill is involved in this tune, he's more than capable of it.

When it comes to technical skill however there's one man who loves to flaunt his ability in every song he writes, and that man's name is Les Claypool, singer and bassist of Primus.

Primus - Jerry Was A Racecar Driver

If all you did was listen to that opening riff than I'll be satisfied. He uses a six string bass so he can play more complex material which can be a blessing and a curse. On the plus side it their band sounds nothing like anybody else out there and that's partly down to the unique playing style of Les. On the downside... Primus aren't exactly a hit factory. They wont be included in the top 40 with the sort of bizarre rock they keep producing, but I doubt they were aiming to do that anyway. This song is a bonafide tune however which first came to my attention because of its inclusion in the Tony Hawks Pro Skater soundtrack.

The trusty bass guitar is no longer the only way to bring an almighty thick tone to a track. With the resurrection of the superstar DJ electronic bass sounds are all the rage, with synthesizers proving more than capable of bringing the noise. In fact with the rise of genres such as drum and bass, dubstep and trap, these bass sounds are more commonplace in the charts nowadays than their analogue relation.

Skip to 1:05 to hear the ridiculous assortment of bass this lad utilises. Heavy duty stuff! Bass in this genre of music is very much at the forefront of the track. Enjoying the spotlight for once and rewarding those who have invested in a decent set of speakers and a sub woofer. Whilst were in the realms of electronic wizardry I may as well promote a great track that I've been playing constantly.

But in my personal opinion there's nothing quite like the sound of a bass guitar being played within an inch of its life, and what better band to demonstrate why I think this than one of the best bands in the world today. Queens Of The Stone Age.