Reuben: 10 Reasons Why They Should Be On Your Ipod.

Remember when I said top 10s were so 2012? No? Me neither so lets proceed. In case your unaware Reuben were/are a three piece rock and roll band who went on hiatus in 2008. Five years on and I think its time they did the right thing and get back to making music. Even if that doesn't happen here's why you should listen to them anyway.

First and foremost they have some almighty rock tunes in the bank. This is the first track off the first album and pretty much encompasses all aspects of their sound to glorious effect. Its called "No-one Wins The War" so put it on your ipod before you forget and rue your poor memory for forgetting such a gem!

The boys in Reuben love partaking in video diaries. In fact throughout the making of the third album the camera was rolling. Avant - Garde Blues is the new post hardcore.

When Reuben unplug its good listening. This version of "Moving to Blackwater" is just as strong as the studio one and that's the sign of a ruddy good musical outfit. Plus look at that acoustic bass. A fine specimen.

4. They Almost Made It HUGE.

You know how Muse are a stadium band now and Biffy Clyro are treading into arena territory? Well back in the day Reuben were just as highly regarded. Their third album "In Nothing We Trust" was critically acclaimed by just about everyone and they were being pushed hard by magazines such as Kerrang and Rocksound. However a combination of tour exhaustion, dis-illusionment and the added stress of running their record label "Hideous Records" the band went on hiatus much to the disappointment of many. To make amends for this unfortunate series of events its your duty as a blog reader to give them a listen.

In 2005 a band called "Los Skeletos" appeared on Myspace and announced they were going to be playing "the hits of Reuben" on their short tour. Surprise surprise it was the actual band! Why did they do this? Bassist Jon Pearce explains!

"We wanted to play some new songs - we had a whole album's worth, and it's always rubbish to go and see your favourite band and them not play the hits, so we called ourselves Los Skeletos and played a couple of shows. It meant there were no Reuben fans there waiting to hear Freddy Kreuger or any of the other singles - they got to see a brand new band playing brand new songs."

Main stage slot. Same day as Iron Maiden. That's something to write on your CV. The sing along at the end is lovely as well. Tracks called "Stuck In My Throat" and its a bit full on!

Keep It To Yourself (above) is my favourite out of the bunch mainly due to the fantastic displays of head banging. The band have done a range though from the funny to the disturbing to the early quite rubbish ones (Moving To Blackwater doesn't really work). But they're all an experience and more than make up for the low budget in creativity. 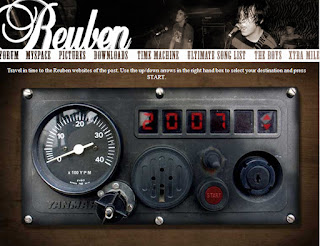 On the official website www.wordsfromreuben.com there is a time machine feature. You can travel back to every single reincarnation of the website and have a look at what was going on with the band at that time period. A nice feature which should be utilised more often. CHECK IT OUT YO.

My favourite track by the band. It builds and builds throughout until it all just explodes into a rock n roll crescendo. Riffs climb on top of each other and fight for supremacy and the pop chorus is superb. There is a Zane Lowe session version somewhere in the corridors of time that I am yet to find and would be very much appreciative if someone found it and linked me. Thank you in advance.