This week I have been house bound due to my new bathroom being fitted . Although the builders seem nice and trustworthy, they require paperwork from me and tea thus my attendance is key. So whist sitting at home waiting to start writing for the new issue of ESP magazine (http://www.espmag.co.uk/)  to come through, I've started on a new project.

Its not a journalistic project in any way, shape or form which has put the idea very much at the back of my priority list. Its also something which is slightly ridiculous and therefore if it all comes to naught (which is a strong possibility) at least I'll have some blog material!
Anyway that's all going to be revealed in the next blog post because its not ready yet.

In the meantime here are some pretty out there projects which I've read about. Note: Mine isn't as good , nor as mental as these selections. 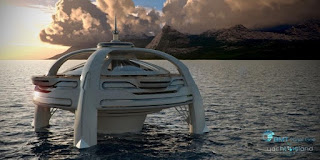 Its a floating yacht island. This is in production. I'm not the biggest fan of cruises but this is the best thing since Sonic the hedgehog.
"Measuring 100m in length and breadth, and spanning over 11 decks with the equivalent volume of a present‐day cruise liner, there is enough space to create an entire micronation".

An actual C.I.A cover up. MKUltra conducted experiments in behavioural engineering on humans (mind control). Sanctioned in 1953 these illegal activities continued until the project was officially halted in 1974. CIA director Richard Helms ordered every file concerning the project to be destroyed in 1973 however in 1977 over 20,000 documents were uncovered and officially de-classified in 2001.
Those of you familiar with Call of Duty: Black Ops will be aware of MKUltra as its the cause of the lead protagonists visions. Amazingly its probably the least far fetched aspect of the game.

An act passed by US congress in 2004 which pledged $5 billion to the purchasing of vaccines and medicines to protect the US citizens against a biological terrorist attack. 9 years later and the US now has a significant stock of supplies and countermeasures to tackle bioterror including...
The UK health secretary Alan Milburn signed a pact with the US in 2001 to help protect both countries against bioterrorism saying the pact will "strengthen contingency plans as both public health systems stand together". Hopefully this means the UK will benefit from project bioshield. It would be nice.

Three projects that intertwine with each other and could be responsible for fuelling the dreams of alien loving star gazers everywhere. "High Dive" was a project in the 50's carried out by the US air force testing high altitude parachutes using anthropomorphic (to scale human shaped) dummies. The project was abandoned after tests showed the dummies were sent into a 200rpm flat spin which would effectively kill a human. 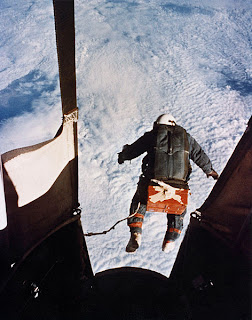 This ground work however led to "Project Excelsior", which set out to establish safe high altitude parachute jumps. During this project Joe Kittinger (picture above) set world records for the highest parachute jump, longest parachute fall and fastest speed by a human through the atmosphere. Records unbeaten until Felix Baumgartner's space jump, a project which Joe Kittinger played a big part in helping come to life.

Excelsior is often confused with Project Mogul which was yet another US air force excursion which ran from 1947 - 1949. Mogul was a project which involved microphones being flown on high altitude balloons which purpose was to detect sound waves from soviet atomic bomb tests. It was also the spark for the Sky-hook balloon programme now popularised due to its inclusion in "The Dark Knight" film.

Project Mogul is also suspected to be the cause of the "UFO" crash in Roswell New Mexico in 1947! Spawning films, documentaries, books and so much more Roswell has become the hub for alien enthusiasts to gather.

The US air force maintain that the debris was nothing more than a crashed Mogul surveillance balloon but that hasn't stopped hundreds of theories speculating that intelligent life from outer space has visited our planet. If it was indeed Mogul than the US air force has inadvertently started a multi-million pound pop culture phenomena however if it wasn't then soon enough Will Smith will need to save the day.

Will Smith for President 2016.
Alex